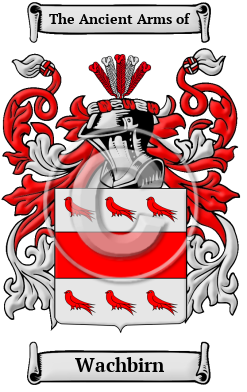 The name Wachbirn came to England with the ancestors of the Wachbirn family in the Norman Conquest of 1066. The Wachbirn family lived at Washbourne in Devon. [1] The Domesday Book lists the village as Waseborne [2] and literally meant "stream used for washing (sheep or clothes.)" [3]

Alternatively, the name could have originated at Washburn, in Yorkshire or at Great Washbourne or Little Washbourne, parishes in Gloucestershire. [4] The Gloucestershire parishes actually date back to Saxon times when they were collectively known as Uassanburnan in 780. By the time of the Domesday Book both were known Waseborne. [2]

Early Origins of the Wachbirn family

The surname Wachbirn was first found in Devon where it is related the family took their name from Waseborne, now Wasbourne in that county soon after the Norman Conquest in 1066. This village was granted to Hermer from Gotshelm. [1]

By the end of the 11th century they had branched to Worcestershire where they became a family great consequence. They were generations of knights at the Manor at the Washbournes intermarring with the distinguished families of Zouch, Corbett, Wysham, Blount and the Earls of Warwick. Sir Roger Washbourne is the first on record.

The Hundredorum Rolls of 1273 list William de Wassebourn in Huntingdonshire and Anthony Washbourne from Worcestershire was registered at Oxford University (no date given.) [5]

Early History of the Wachbirn family

It is only in the last few hundred years that the English language has been standardized. For that reason, Anglo-Norman surnames like Wachbirn are characterized by many spelling variations. Scribes and monks in the Middle Ages spelled names they sounded, so it is common to find several variations that refer to a single person. As the English language changed and incorporated elements of other European languages such as Norman French and Latin, even literate people regularly changed the spelling of their names. The variations of the name Wachbirn include Washbourne, Washburn, Washborne, Washborn and others.

Outstanding amongst the family at this time was William Washbourne, High Sheriff of Montgomeryshire in 1631; and Thomas Washbourne (1606-1687), an English clergyman and poet, Canon of Gloucester, best known for his 1654 book Divine Poems. "He was younger son of John Washbourne of Wichenford, Worcestershire. The Washbourne family had been settled in Gloucestershire for several centuries. " [6] John Washbourn (1760?-1829), was a local historian, son of John Washbourn (d. 1824?) and was descended from an ancient Gloucestershire family (Burke...
Another 80 words (6 lines of text) are included under the topic Early Wachbirn Notables in all our PDF Extended History products and printed products wherever possible.

Migration of the Wachbirn family

Faced with the chaos present in England at that time, many English families looked towards the open frontiers of the New World with its opportunities to escape oppression and starvation. People migrated to North America, as well as Australia and Ireland in droves, paying exorbitant rates for passages in cramped, unsafe ships. Many of the settlers did not make the long passage alive, but those who did see the shores of North America were welcomed with great opportunity. Many of the families that came from England went on to make essential contributions to the emerging nations of Canada and the United States. Some of the first immigrants to cross the Atlantic and come to North America carried the name Wachbirn, or a variant listed above: Margerie Washborn settled in Boston Massachusetts in 1635 with her two sons, Joe, and Phillip; John Washborne settled in Virginia in 1619; one year before the &quot.