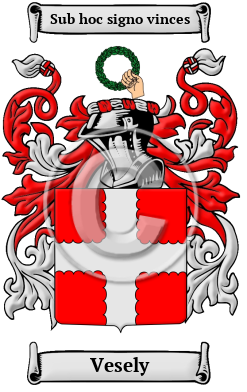 Vesely is a name that was brought to England by the ancestors of the Vesely family when they migrated to the region after the Norman Conquest in 1066. The Vesely family lived in Northampton. The name, however, derives from the family's place of residence prior to the Norman Conquest of England in 1066, Vassy, Normandy. One of the first records of the name was Robertus Invesiatus, Lascivus which appeared in the Domesday Book [1] in Essex [2]. Other records show the name was originally De Vesci, which was a baronial name, a branch of the De Burgh family. [3]

Early Origins of the Vesely family

The surname Vesely was first found in Northampton where Robert de Vassy (Veci) and his brother Ivo were granted nineteen Lordships in that county and overlapping into Warwick, Lincoln, and Leicester, by Duke William of Normandy, their liege Lord, for their distinguished assistance at the Battle of Hastings in 1066 A.D.

Early History of the Vesely family

Another 49 words (4 lines of text) are included under the topic Early Vesely Notables in all our PDF Extended History products and printed products wherever possible.

In the United States, the name Vesely is the 13,382nd most popular surname with an estimated 2,487 people with that name. [7]

Migration of the Vesely family to Ireland

Some of the Vesely family moved to Ireland, but this topic is not covered in this excerpt.
Another 35 words (2 lines of text) about their life in Ireland is included in all our PDF Extended History products and printed products wherever possible.

Vesely migration to the United States +

Many English families emigrated to North American colonies in order to escape the political chaos in Britain at this time. Unfortunately, many English families made the trip to the New World under extremely harsh conditions. Overcrowding on the ships caused the majority of the immigrants to arrive diseased, famished, and destitute from the long journey across the stormy Atlantic. Despite these hardships, many of the families prospered and went on to make invaluable contributions to the development of the cultures of the United States and Canada. Early North American immigration records have revealed a number of people bearing the name Vesely or a variant listed above:

Vesely Settlers in United States in the 19th Century

Vesely Settlers in United States in the 20th Century