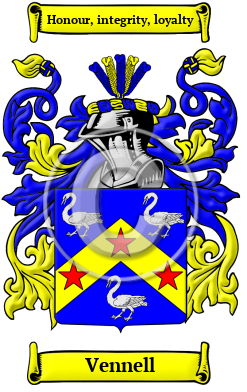 The roots of the Anglo-Saxon name Vennell come from when the family resided near a place where vennel grew. Vennel was an herb used for cooking. Other sources list the name as a local name derived from the term at the vennel. [1]

Early Origins of the Vennell family

Early History of the Vennell family

This web page shows only a small excerpt of our Vennell research. Another 78 words (6 lines of text) covering the years 1150, 1292, 1296, 1661 and 1172 are included under the topic Early Vennell History in all our PDF Extended History products and printed products wherever possible.

The English language only became standardized in the last few centuries; therefore,spelling variations are common among early Anglo-Saxon names. As the form of the English language changed, even the spelling of literate people's names evolved. Vennell has been recorded under many different variations, including Fennell, Vennell, Venall, Fenel and others.

More information is included under the topic Early Vennell Notables in all our PDF Extended History products and printed products wherever possible.

Migration of the Vennell family to Ireland

Some of the Vennell family moved to Ireland, but this topic is not covered in this excerpt.
Another 43 words (3 lines of text) about their life in Ireland is included in all our PDF Extended History products and printed products wherever possible.

Vennell Settlers in New Zealand in the 19th Century

Historic Events for the Vennell family +