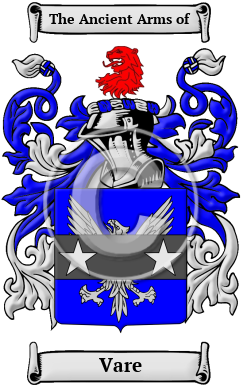 Vare is an ancient Scottish name that was first used by the Strathclyde-Briton people of the Scottish/English Borderlands. It is a name for someone who lived in Ayrshire, where the family was found since the early Middle Ages. It is generally thought to have been a habitational name, taken on from any of various place names in southwestern Scotland, in particular in Ayrshire and Renfrewshire. These place names derive from the Gaelic word barr, meaning "height," or "hill." [1]

Further to the south in England, one of the early noteworthy people in the family was Richard Barre " (fl. 1170-1202), ecclesiastic and judge, [who] acted as the envoy of Henry II to the papal court, both shortly before and immediately after the murder of Thomas Becket. On the first occasion he was the bearer of a haughty and even minatory message from the king demanding that the pope should absolve all those who had been excommunicated by the Archbishop of Canterbury. Barre was entrusted with the custody of the great seal on the coronation of the heir apparent in 1170, but on the revolt of the prince in 1173 he offered to surrender it to the king. Barre probably succeeded Richard de Ely, otherwise FitzNeale, as archdeacon of Ely in 1184." [2]

Early Origins of the Vare family

The surname Vare was first found in Ayrshire (Gaelic: Siorrachd Inbhir Àir), formerly a county in the southwestern Strathclyde region of Scotland, that today makes up the Council Areas of South, East, and North Ayrshire. "The surname is most frequently found at the present day in the district around Glasgow, and is a common surname in the Kilbarchan Commissariot Record. Atkyn de Barr was bailie of Ayr c. 1340. John Bar or de Barre was burgess of Edinburgh in 1423." [1]

However, some of the family were first found further south at Tollerton in Nottinghamshire, England. "This place, which takes its name from Torlaston, one of its possessors before the Conquest, in the reign of Stephen became the manor of Radulphus Barre, with whose descendants it still remains." [3]

"His wife must have been a De Lisle, for his son Richard, in one of his deeds, speaks of Ranulf de Insula, his grandfather, and Matilda Malebisse, his grandmother. Fifth in descent from Richard was Thomas, Dominus de Teversall (or Tearsall), who first called himself Barry, as the family continued to do till it ended with John Barry in the reign of Henry VI. A branch seated at Torlaston lasted about one hundred years longer. These Barres or Barrys were benefactors to the monks of Beauchief." [4]

Richard de Barra was listed in the Domesday Book of 1086 as holding lands in Somerset at that time. [5]

Early History of the Vare family

In Medieval times, spelling and translation were not nearly so highly developed as today. They were generally carried out according to the sound and intuition of the bearer. For that reason spelling variations are extremely common among early Scottish names. Vare has been spelled Barr, Barre and others.

Notable amongst the family at this time was Richard Barre (fl. 1170-1202), an English ecclesiastic and judge who acted as the envoy of Henry II to the papal court, both shortly before and immediately after the murder of Thomas Becket. On the first occasion he was the bearer of a haughty and even minatory message from the king demanding that the pope should absolve all those who had been excommunicated by the Archbishop of Canterbury. The mission, it need hardly be said, failed of its object. The letter from Alexander III to the Archbishop of York, which Foss connects with it...
Another 180 words (13 lines of text) are included under the topic Early Vare Notables in all our PDF Extended History products and printed products wherever possible.

Migration of the Vare family to Ireland

Some of the Vare family moved to Ireland, but this topic is not covered in this excerpt.
Another 60 words (4 lines of text) about their life in Ireland is included in all our PDF Extended History products and printed products wherever possible.

Vare migration to the United States +

Vare Settlers in United States in the 19th Century