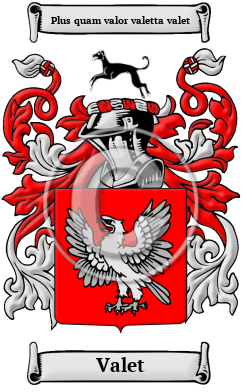 Early Origins of the Valet family

The surname Valet was first found in Languedoc where this distinguished family held a family seat at Viesamp-Pern, and were members of the ruling aristocracy of that region. This main stem branched to Vivarais, Perigord, Quercy, Rouergue, and Auvergne, and would emerge as the Marquis de la Valette Chabrioul.

Early History of the Valet family

This web page shows only a small excerpt of our Valet research. More information is included under the topic Early Valet History in all our PDF Extended History products and printed products wherever possible.

Notable amongst the family name at this time was Nicolas Vallet (c. 1583 - c. 1642) French-born, Dutch lutenist and composer. He was born at Corbeny, Aisne, but fled from France to the Netherlands for religious reasons. He is best known for his Le Secret des Muses...
Another 47 words (3 lines of text) are included under the topic Early Valet Notables in all our PDF Extended History products and printed products wherever possible.

Valet migration to the United States +

Valet Settlers in United States in the 18th Century

Valet Settlers in United States in the 19th Century

Valet Settlers in Canada in the 18th Century