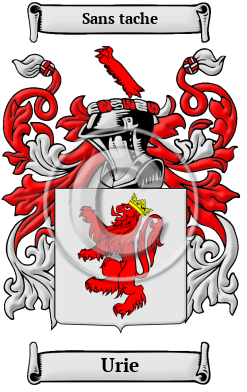 Early Origins of the Urie family

The surname Urie was first found in Ayrshire (Gaelic: Siorrachd Inbhir Àir), formerly a county in the southwestern Strathclyde region of Scotland, that today makes up the Council Areas of South, East, and North Ayrshire.

Early History of the Urie family

Notable amongst the family at this time was Sir John Urry (or Hurry) (died 1650), a Scottish professional soldier; and his brother, Sir William Urry (died 1677), a Scottish Royalist officer during the Wars of the Three Kingdoms, he joined Charles II in exile during the Interregnum; and his son, John Urry (1666-1715), an Irish-born, Scottish noted literary editor and medieval scholar. Isaac Ewer, Ewers or Ewres (died c.1650), was an English soldier probably born in...
Another 75 words (5 lines of text) are included under the topic Early Urie Notables in all our PDF Extended History products and printed products wherever possible.

Urie migration to the United States +

Urie Settlers in United States in the 17th Century

Urie Settlers in United States in the 19th Century

Urie Settlers in United States in the 20th Century

Urie Settlers in Canada in the 19th Century

Urie Settlers in New Zealand in the 19th Century