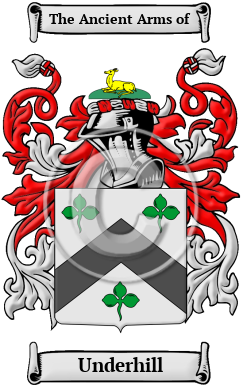 The Anglo-Saxon name Underhill comes from when the family resided at the foot of a hill or in the settlement of Underhill in Devon. The surname Underhill belongs to both the category of habitation names, which are derived from pre-existing names for towns, villages, parishes, or farmsteads, and the class of topographic surnames, which were given to people who resided near physical features such as hills, streams, churches, or types of trees.

Early Origins of the Underhill family

The surname Underhill was first found in Staffordshire where they held a family seat from very ancient times, before and after the Norman Conquest in 1066.

Early History of the Underhill family

The English language only became standardized in the last few centuries; therefore,spelling variations are common among early Anglo-Saxon names. As the form of the English language changed, even the spelling of literate people's names evolved. Underhill has been recorded under many different variations, including Underhill, Undrell and others.

Notables of the family at this time include Edward Underhill (fl. 1539-1561), the 'hot-gospeller,' who came 'of a worshipful house in Worcestershire,' and was born probably about 1515. His grandfather, John Underhill, originally of Wolverhampton, acquired in 1509 a lease of Eatington, Warwickshire, and left two sons, Edward and Thomas. Edward inherited Eatington, and was father of Thomas Underhill (1518?-1603), was a leading Protestant. [1] John Underhill (ca. 1545-1592), was an English academic, and later, bishop of Oxford. Cave Underhill (1634-1710?), was an English actor, the son of Nicholas Underhill, clothworker, born in St. Andrew's parish, Holborn. [1] John Underhill (d. 1672), was...
Another 113 words (8 lines of text) are included under the topic Early Underhill Notables in all our PDF Extended History products and printed products wherever possible.

In the United States, the name Underhill is the 3,999th most popular surname with an estimated 7,461 people with that name. [2]

Underhill migration to the United States +

For many English families, the political and religious disarray that shrouded England made the far away New World an attractive prospect. On cramped disease-ridden ships, thousands migrated to those British colonies that would eventually become Canada and the United States. Those hardy settlers that survived the journey often went on to make important contributions to the emerging nations in which they landed. Analysis of immigration records indicates that some of the first North American immigrants bore the name Underhill or a variant listed above:

Underhill Settlers in United States in the 17th Century

Underhill Settlers in United States in the 18th Century

Underhill Settlers in United States in the 19th Century

Underhill Settlers in Canada in the 18th Century

Underhill Settlers in Australia in the 19th Century

Underhill Settlers in New Zealand in the 19th Century

Underhill Settlers in West Indies in the 17th Century

Suggested Readings for the name Underhill +