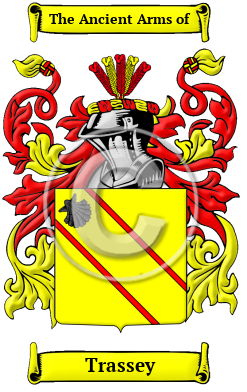 The Trassey surname was originally a habitational name, taken on from a place name in Normandy, possibly from Tracy-Bocage or Tracy-sur-Mer in Calvados. These place names are said to derived from the Gallo-Roman personal name Thracius. More specifically, "the Norman thus designated on the Roll [of Battle Abbey], derived his name from the town of Traci, in his native Duchy. His descendants became Lords of Barnstaple in Devon, and enjoyed a high repute in that country." [1]

Early Origins of the Trassey family

The surname Trassey was first found in Devon, where they were Lords of Barnstaple. This line was descended from a Norman family from Tracy near Vire in Carne in Normandy. William de Tracy is said to have come to England in 1066, and is mentioned by the poet Wace, in his verse history of Britain, as being at Hastings. Henry de Tracy received a charter for Barnstaple Priory in 1146.

Early History of the Trassey family

Outstanding amongst the family at this time was Sir Robert Tracy, 2nd Viscount Tracy (c. 1593-1662), an English politician who sat in the House of Commons between 1620 and 1640, he fought for the Royalists in the English Civil War. His son was Robert Tracy, 2nd Viscount Tracy of Rathcoole; and his son, Robert Tracy (1655-1735), an English judge from Toddington, Gloucestershire. Richard Tracy (d. 1569), was...
Another 65 words (5 lines of text) are included under the topic Early Trassey Notables in all our PDF Extended History products and printed products wherever possible.

Migration of the Trassey family to Ireland

Some of the Trassey family moved to Ireland, but this topic is not covered in this excerpt.
Another 68 words (5 lines of text) about their life in Ireland is included in all our PDF Extended History products and printed products wherever possible.

Trassey migration to the United States +

Trassey Settlers in United States in the 17th Century

Trassey Settlers in New Zealand in the 19th Century