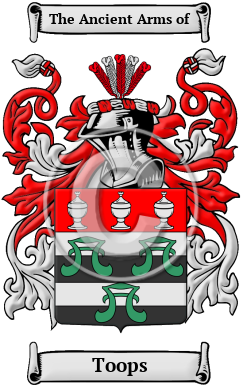 The origins of the name Toops are from the ancient Anglo-Saxon culture of Britain. It is derived from the Old Danish personal name Topi. Many Scandinavian personal names were left in the British Isles as a legacy of the Viking raids which plagued the coastal regions of Britain from the 8th to 10th centuries, and many of these eventually became Anglo-Saxon surnames.

Early Origins of the Toops family

The surname Toops was first found in Somerset, where the first records of the name are Robert Top and William Toppe, bother recorded there 1 Edward III (during the first year of the reign of King Edward III.) [1]

"The Dorset family of Topp probably belong to the ancient Wiltshire family of Topp, now extinct, that held the manor of Stockton in Wilts from before the Reformation until the close of last century, when it passed by marriage into the possession of Robert Balch, Esq., of St. Audries, Somerset." [2]

"The manor of Killenick [at Land's End, Cornwall] belonged, in the reign of Richard II. to John Longeland and Lankford. This manor has been dismembered ; and it was sold in the year 1720, under a decree of chancery, in its divided state. Bosvargus, which was formerly a seat belonging to a family of that name, was at one time inherited by the learned Jonathan Toup, rector of St. Martin's, near Looe." [3]

Some of the family were found in Scotland as "Edward Top admitted [was] burgess of Aberdeen, 1486 is doubtless the Edward Top who was fined in 1497 for 'failzeit in the waching of the tone.'" [4]

Early History of the Toops family

This web page shows only a small excerpt of our Toops research. Another 60 words (4 lines of text) covering the years 1202, 1580 and 1639 are included under the topic Early Toops History in all our PDF Extended History products and printed products wherever possible.

Sound was what guided spelling in the essentially pre-literate Middle Ages, so one person's name was often recorded under several variations during a single lifetime. Also, before the advent of the printing press and the first dictionaries, the English language was not standardized. Therefore, spelling variations were common, even among the names of the most literate people. Known variations of the Toops family name include Toop, Toope, Tooppe, Toopes, Toup, Toupe, Tupe, Toowp and many more.

More information is included under the topic Early Toops Notables in all our PDF Extended History products and printed products wherever possible.

Migration of the Toops family

For political, religious, and economic reasons, thousands of English families boarded ships for Ireland, the Canadas, the America colonies, and many of smaller tropical colonies in the hope of finding better lives abroad. Although the passage on the cramped, dank ships caused many to arrive in the New World diseased and starving, those families that survived the trip often went on to make valuable contributions to those new societies to which they arrived. Early immigrants bearing the Toops surname or a spelling variation of the name include: Johanna Toop, who, at the age of 21; sailed to Jamaica in 1731; Henry Toopes, who arrived in Pennsylvania in 1753; and John Toop, who settled in Maryland in 1823..