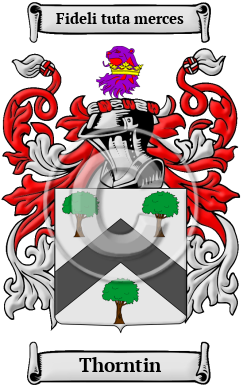 The ancient history of the Thorntin name begins with the ancient Anglo-Saxon tribes of Britain. The name is derived from when the family resided in the parish of Thornton in the county of Yorkshire. Thorntin is a topographic surname, which was given to a person who resided near a physical feature such as a hill, stream, church, or type of tree. During the Middle Ages, as society became more complex, individuals needed a way to be distinguishable from others. Toponymic surnames were developed as a result of this need. Various features in the landscape or area were used to distinguish people from one another. In this case the surname Thorntin was originally derived from the Old English terms thorn meaning thorn bushes and tun meaning enclosure or town. Therefore the original bearers of the surname Thorntin were named due to their close proximity to the village where the thorn bushes were plentiful. [1] [2]

Early Origins of the Thorntin family

The surname Thorntin was first found in Cheshire where the founder of the family was Peter Thornton, Secretary to the Blundells. Thornton in Lancashire is home to another branch of the family.

Early History of the Thorntin family

Until quite recently, the English language has lacked a definite system of spelling rules. Consequently, Anglo-Saxon surnames are characterized by a multitude of spelling variations. Changes in Anglo-Saxon names were influenced by the evolution of the English language, as it incorporated elements of French, Latin, and other languages. Although Medieval scribes and church officials recorded names as they sounded, so it is common to find one person referred to by several different spellings of his surname, even the most literate people varied the spelling of their own names. Variations of the name Thorntin include Thornton, Thornten and others.

Notables of this surname at this time include: Sir Roger Thornton of Soane, Cambridgeshire; and Sir Isaac Thornton (1615-1669), an English lawyer and politician who sat in the House of Commons in 1660. Robert Thornton (fl. 1440), was the transcriber of the 'Thornton Romances.' Thornton spent much of his life in transcribing, and perhaps translating into English, romances and other works popular in his day. [5] Robert Thoroton (1623-1678), was an English antiquary, the son of Robert and Anne Thoroton. "His ancestors had long held considerable property in...
Another 86 words (6 lines of text) are included under the topic Early Thorntin Notables in all our PDF Extended History products and printed products wherever possible.

Migration of the Thorntin family to Ireland

Some of the Thorntin family moved to Ireland, but this topic is not covered in this excerpt.
Another 88 words (6 lines of text) about their life in Ireland is included in all our PDF Extended History products and printed products wherever possible.

Migration of the Thorntin family

Searching for a better life, many English families migrated to British colonies. Unfortunately, the majority of them traveled under extremely harsh conditions: overcrowding on the ships caused the majority of the immigrants to arrive diseased, famished, and destitute from the long journey across the ocean. For those families that arrived safely, modest prosperity was attainable, and many went on to make invaluable contributions to the development of the cultures of the new colonies. Research into the origins of individual families in North America revealed records of the immigration of a number of people bearing the name Thorntin or a variant listed above: James Thornton who arrived in Maryland in 1633; Joanna Thornton settled in New England with her husband Walter and Robert her son in 1635; Mary Thornton settled in New York in 1705..