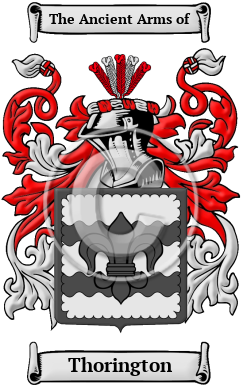 Early Origins of the Thorington family

The surname Thorington was first found in Devon where they held a family seat from very ancient times where there are no fewer than three towns and villages by that name: Black Torrington, Great Torrington and Little Torrington. The place names were collectively listed as Tori(n)tona [1] in the Domesday Book of 1086 but by 1219 the village was known as Blaketorrintun which later evolved into Black Torrington. Great Torrington has historically been the largest and most historical of the parishes.

"The name of this place is derived from its situation on the river Torridge; and its antiquity as a market-town is evident from various old records, in which it occurs under the appellation of Cheping-Toriton. At a very early period it gave the title of Baron to its lords, who had the power of life and death throughout the lordship." [2]

Great Torrington was the site of the Battle of Torrington on February 16, 1646 between the Royalists and the Parliamentarians. HMS Torrington was a 32-gun fifth rate launched in 1676. The surname is conjecturally descended from Roger who held lands from the Norman Baron Ralph of Pomeroy. Thorington is a village and a civil parish in the hundred of Blything, in Suffolk.

And it is here in Devon, that we find the first records of the family, specifically, William de Torinton, who appeared in the Pipe Rolls of 1218. [3]

The Thorington variant hails from either Suffolk or Essex where parishes can be found. [4] [5] Torentuna was the name of the Suffolk parish in the Domesday Book of 1086 [1] and it literally meant "thorn-tree enclosure or farmstead," from the Old English "thorn" or "thyrne" + "tun. [6] The Essex village is now known by the name Thorrington, but in Domesday times, it was known as Torinduna [1] and later in 1202 as Torritona. [6]

Early History of the Thorington family

This web page shows only a small excerpt of our Thorington research. Another 52 words (4 lines of text) covering the years 164 and 1645 are included under the topic Early Thorington History in all our PDF Extended History products and printed products wherever possible.

Spelling variations of this family name include: Torrington, Torrinton, Torring and others.

More information is included under the topic Early Thorington Notables in all our PDF Extended History products and printed products wherever possible.

Thorington migration to the United States +

Thorington Settlers in United States in the 17th Century

Thorington Settlers in Australia in the 19th Century