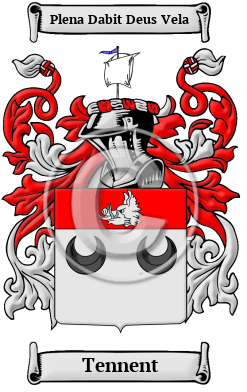 The chronicles of Scottish history reveal that the first people to use the name Tennent were the Strathclyde-Britons. It was a name for a tenant farmer. The name was applied to those who paid for the rent on their land through working the fields and donating a percentage of the take to the landlord. [1] [2] [3] [4]

Early Origins of the Tennent family

The surname Tennent was first found in Linlithgowshire (Gaelic: Lodainn an Iar), former county in south-central Scotland, now the Council Area West Lothian, where they held a family seat at Crestone or Creston from about the year 1150 A.D.

Early History of the Tennent family

Prior to the first dictionaries, scribes spelled words according to sound. This, and the fact that Scottish names were repeatedly translated from Gaelic to English and back, contributed to the enormous number of spelling variations in Scottish names. Tennent has been spelled Tennant, tenant, Tennand, Tennan, Tenman, Tennend, Tennent, Tenand and many more.

Notable amongst the family at this time was John Tennent of Listonshiels (died c. 1549), a servant and companion of James V of Scotland; and William Tennent (1673-1746), an early American religious leader and educator in British North America. Born in Mid Calder, Linlithgowshire, Scotland, he graduated from the University of Edinburgh in...
Another 53 words (4 lines of text) are included under the topic Early Tennent Notables in all our PDF Extended History products and printed products wherever possible.

Migration of the Tennent family to Ireland

Some of the Tennent family moved to Ireland, but this topic is not covered in this excerpt. More information about their life in Ireland is included in all our PDF Extended History products and printed products wherever possible.

Tennent migration to the United States +

Tennent Settlers in United States in the 19th Century

Tennent Settlers in New Zealand in the 19th Century