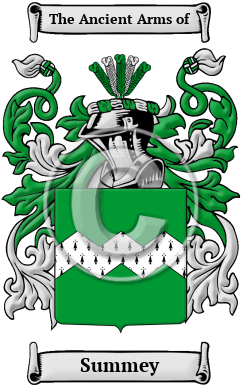 The name Summey was spawned by the ancient Anglo-Saxon culture that ruled a majority of Britain. It comes from the baptismal name for the son of Summer, a personal name given to a child who was born in the summer. [1]

Looking at the surname and many of its variants over the past couple of hundred years, one can only presume that this is the logical and only explanation for the surname's origin. However, let's explore some contrarian explanations. The name could have been derived from "De Someri, a baronial family. Ralph de Summeri of Normandy temp. John. From Sommeri, near Rouen. " [2]

The name could have been derived from the "personal-name Sumor but there is no evidence from the use of such a person named in the Domesday Book or later." [3]

This noted author continues "the surname is probably identical with the Scottish "Simmer." In Scots, somer is 'a sumpter,' [(packhorse, mule, beast of burden)]applied to men and horses alike." [3] We shall leave the reader with the perplexing conundrum.

Early Origins of the Summey family

The surname Summey was first found in Worcestershire they trace their ancestry to the manor of Whiteladies.

One of the earliest records of the family was John Somer, Semur, Somerarius (fl. 1380), "Minorite astronomer, belonged to the Franciscan house at Bridgewater, and was probably at Oxford in 1380. " [4]

One of the more interesting family members was William Sommers (died 1560), who is said to have been Henry VIII's fool and a native of Shropshire and "at one time a servant in the household of Richard Fermorq of Easton Neston, Northamptonshire. Brought by his master to the court at Greenwich, 'on a holy day,' about 1525, the king is reported to have noticed favourably his witty sallies and to have installed him at once in the royal household as the court fool. According to tradition, Sommers was soon on very familiar terms with the king. He puzzled him with foolish riddles, and amused him by playing practical jokes on Cardinal Wolsey. " [4]

Early History of the Summey family

Summey has been spelled many different ways. Before English spelling became standardized over the last few hundred years, spelling variations in names were a common occurrence. As the English language changed in the Middle Ages, absorbing pieces of Latin and French, as well as other languages, the spelling of people's names also changed considerably, even over a single lifetime. Many variations of the name Summey have been found, including Somers, Sommers, Summers, Sommer, Summer, Somerton, Sommerton, Sumpton, Sumption and many more.

Distinguished members of the family include Henry Somer (fl. 1440), Chancellor of the Exchequer, probably a relative of John Somer, Clerk of the Exchequer in the early years of Henry IV; and William 'Will' Sommers (or Somers) (died 1560), the best-known court jester of Henry VIII of England from Shropshire. Admiral Sir George...
Another 52 words (4 lines of text) are included under the topic Early Summey Notables in all our PDF Extended History products and printed products wherever possible.

In the United States, the name Summey is the 11,294th most popular surname with an estimated 2,487 people with that name. [5]

Migration of the Summey family to Ireland

Some of the Summey family moved to Ireland, but this topic is not covered in this excerpt.
Another 136 words (10 lines of text) about their life in Ireland is included in all our PDF Extended History products and printed products wherever possible.

Summey migration to the United States +

In an attempt to escape the chaos experienced in England, many English families boarded overcrowded and diseased ships sailing for the shores of North America and other British colonies. Those families hardy enough, and lucky enough, to make the passage intact were rewarded with land and a social environment less prone to religious and political persecution. Many of these families became important contributors to the young colonies in which they settled. Early immigration and passenger lists have documented some of the first Summeys to arrive on North American shores:

Summey Settlers in United States in the 18th Century