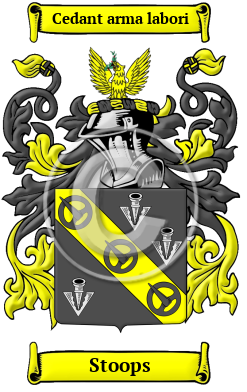 Following the Norman Conquest of England in 1066, the name Stoops was first found in Britina. It was a name for a a short or stocky person, having derived from the Old English word stybb, of the same meaning. A broad and miscellaneous class of surnames, nickname surnames referred to a characteristic of the first person who used the name. They can describe the bearer's favored style of clothing, appearance, habits, or character. [1]

Early Origins of the Stoops family

The surname Stoops was first found in Staffordshire where they were granted lands at Water-Eaton and Bloxwich by William the Conqueror for their assistance at the Battle of Hastings in 1066.

There are elaborate accounts of this family's descent from Belmeis or Beaumeis from Beaumeis-Sur-Dive from Calvados in Normandy through Richard Belmeis, the founder of the family, who was a follower of Roger de Montogomery who was Sheriff of Shropshire and later Bishop of London, about 1100. [2]

One of the earliest records of the family was Thomas Stubbs (fl. 1373), an English "chronicler, [who] is said by Bale to have been a native of Yorkshire and a Dominican friar. " [3]

Early History of the Stoops family

It is only in the last few hundred years that the English language has been standardized. For that reason, Anglo-Norman surnames like Stoops are characterized by many spelling variations. Scribes and monks in the Middle Ages spelled names they sounded, so it is common to find several variations that refer to a single person. As the English language changed and incorporated elements of other European languages such as Norman French and Latin, even literate people regularly changed the spelling of their names. The variations of the name Stoops include Stubbs, Stubs, Stubbes, Stubb, Stubbe and others.

Outstanding amongst the family at this time was Leonard Stopes (1540?-1587?), was an English priest, "born about 1540, probably belonged to the branch of the family of Stopes settled at Much Hadham in Hertfordshire, and may have been brother of James Stopes, whose son James, brother of St. Catharine's by the Tower, was rector...
Another 53 words (4 lines of text) are included under the topic Early Stoops Notables in all our PDF Extended History products and printed products wherever possible.

In the United States, the name Stoops is the 6,626th most popular surname with an estimated 4,974 people with that name. [4]

Migration of the Stoops family to Ireland

Some of the Stoops family moved to Ireland, but this topic is not covered in this excerpt. More information about their life in Ireland is included in all our PDF Extended History products and printed products wherever possible.

Stoops migration to the United States +

Faced with the chaos present in England at that time, many English families looked towards the open frontiers of the New World with its opportunities to escape oppression and starvation. People migrated to North America, as well as Australia and Ireland in droves, paying exorbitant rates for passages in cramped, unsafe ships. Many of the settlers did not make the long passage alive, but those who did see the shores of North America were welcomed with great opportunity. Many of the families that came from England went on to make essential contributions to the emerging nations of Canada and the United States. Some of the first immigrants to cross the Atlantic and come to North America carried the name Stoops, or a variant listed above:

Stoops Settlers in United States in the 17th Century

Stoops Settlers in United States in the 20th Century