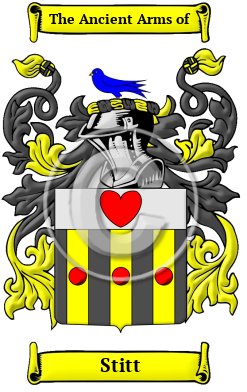 The Stitt surname is generally thought to derive from the Middle English word "stott," meaning a "steer," or "bull." [1]

Early Origins of the Stitt family

The surname Stitt was first found in Yorkshire, but by the 15th century some of the family name had moved north to Aberdeenshire where Andrew Stott was a burgess there in 1490. Later, Margaret Stote held a family seat in Dolphinstoun in Lanarkshire in 1675, and Alexander Stote held a family seat in Maynes in Balyeordie in Renfrewshire in 1689. [2]

Early History of the Stitt family

Notable amongst the family at this time was John Stith (fl. 1656-1691) from Kirkham in Lancashire, emigrated to America where he became a member of the Virginia House of Burgesses and the progenitor...
Another 32 words (2 lines of text) are included under the topic Early Stitt Notables in all our PDF Extended History products and printed products wherever possible.

In the United States, the name Stitt is the 4,377th most popular surname with an estimated 7,461 people with that name. [3]

Migration of the Stitt family to Ireland

Some of the Stitt family moved to Ireland, but this topic is not covered in this excerpt.
Another 57 words (4 lines of text) about their life in Ireland is included in all our PDF Extended History products and printed products wherever possible.

Stitt migration to the United States +

Stitt Settlers in United States in the 19th Century

Stitt Settlers in Australia in the 19th Century

Historic Events for the Stitt family +