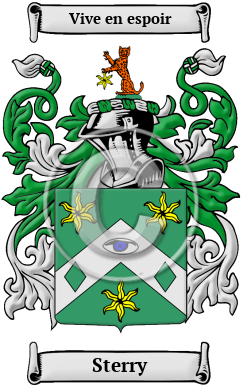 The origins of the Sterry surname date from the ancient Anglo-Saxon culture of Britain. Their name originated with an early member who was a person whose personality or appearance called to mind a star. Sterry is a nickname, which belongs to the category of hereditary surnames. Nicknames form a broad and miscellaneous class of surnames, and can refer directly or indirectly to one's personality, physical attributes, mannerisms, or even their habits of dress. The surname Sterry comes from the Old English words sterre, or starre, which mean star, and would have been given to someone with a bright personality. This word was also used to refer to a white patch of hair on the forehead of a horse, an so, it may have been transferred to refer to someone with a streak of white hair.

Early Origins of the Sterry family

The surname Sterry was first found in Wiltshire where they held a family seat from ancient times in the village of Longbridge Deverill at Glastonbury. It is said that King Alfred, King of the west Saxons, camped the night in the Deverill valley before defeating the Danes at the Battle of Ethandune in 878.

Early History of the Sterry family

This web page shows only a small excerpt of our Sterry research. Another 53 words (4 lines of text) covering the years 1086, 1672, 1629, 1633 and 1637 are included under the topic Early Sterry History in all our PDF Extended History products and printed products wherever possible.

The English language only became standardized in the last few centuries; therefore, spelling variations are common among early Anglo-Saxon names. As the form of the English language changed, even the spelling of literate people's names evolved. Sterry has been recorded under many different variations, including Starr, Star, Starre, Ster, Sterr and others.

Another 33 words (2 lines of text) are included under the topic Early Sterry Notables in all our PDF Extended History products and printed products wherever possible.

Migration of the Sterry family to Ireland

Some of the Sterry family moved to Ireland, but this topic is not covered in this excerpt. More information about their life in Ireland is included in all our PDF Extended History products and printed products wherever possible.

Sterry migration to the United States +

For many English families, the political and religious disarray that shrouded England made the far away New World an attractive prospect. On cramped disease-ridden ships, thousands migrated to those British colonies that would eventually become Canada and the United States. Those hardy settlers that survived the journey often went on to make important contributions to the emerging nations in which they landed. Analysis of immigration records indicates that some of the first North American immigrants bore the name Sterry or a variant listed above:

Sterry Settlers in United States in the 17th Century

Sterry Settlers in United States in the 18th Century

Sterry Settlers in Canada in the 18th Century

Sterry Settlers in Australia in the 19th Century

Sterry Settlers in West Indies in the 17th Century