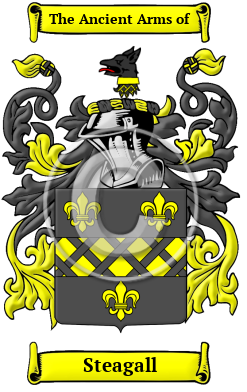 The present generation of the Steagall family is only the most recent to bear a name, whose roots date back to the ancient Anglo-Saxon culture of Britain. The surname is derived from the Old English "stigol," meaning "stile, steep ascent," and refers to a "dweller by the stile." [1] [2] A stile is a set of steps over a stone wall or wooden fence allowing people to traverse, but prevents animals from doing so.

Early Origins of the Steagall family

The surname Steagall was first found in Bedfordshire (Old English: Bedanfordscir), located in Southeast-central England, formerly part of the Anglo-Saxon kingdom of Mercia, where the family held a family seat in early times. The earliest known bearer of the name was Reginald atte Stighel, who was recorded in the Assize Rolls of 1227. The Steagall family branched to other counties at an early date, also appearing in Somerset, where William de Stile and Osmund Atthe Stihele were living in 1229 and 1234 respectively, as well as in Sussex, where William ate Stegel was recorded in the Subsidy Rolls of 1296. [3]

Early History of the Steagall family

The English language only became standardized in the last few centuries; therefore,spelling variations are common among early Anglo-Saxon names. As the form of the English language changed, even the spelling of literate people's names evolved. Steagall has been recorded under many different variations, including Stiles, Styals, Styles, Style, Stoyle, Steggle, Steagall, Steggal and many more.

Notables of this surname at this time include: Sir Thomas Style, 1st Baronet of Wateringbury, Kent; and his son, Sir Thomas Style, 2nd Baronet (1624-1702) was an English politician, Member of Parliament for Kent (1656-1659.) William Style (1603-1679), was an "English legal author, eldest son of William Style...
Another 47 words (3 lines of text) are included under the topic Early Steagall Notables in all our PDF Extended History products and printed products wherever possible.

Migration of the Steagall family to Ireland

Some of the Steagall family moved to Ireland, but this topic is not covered in this excerpt. More information about their life in Ireland is included in all our PDF Extended History products and printed products wherever possible.

Migration of the Steagall family

For many English families, the political and religious disarray that shrouded England made the far away New World an attractive prospect. On cramped disease-ridden ships, thousands migrated to those British colonies that would eventually become Canada and the United States. Those hardy settlers that survived the journey often went on to make important contributions to the emerging nations in which they landed. Analysis of immigration records indicates that some of the first North American immigrants bore the name Steagall or a variant listed above: Francis Stiles, who settled in New England in 1630; Joan Stiles, who immigrated to Boston in 1635; Nathaniell Stiles, who came to Virginia in 1639; as did Elizabeth Stiles in 1721.