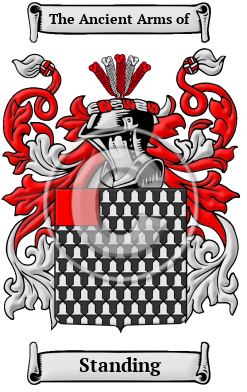 The name Standing is part of the ancient legacy of the Anglo-Saxon tribes of Britain. It is a product of when the family lived in the county of Nottinghamshire in an area that was referred to as stanton, which means stony ground. [1]

Standing is a topographic surname, which was given to a person who resided near a physical feature such as a hill, stream, church, or type of tree. During the Middle Ages, as society became more complex, individuals needed a way to be distinguishable from others. Toponymic surnames were developed as a result of this need. Various features in the landscape or area were used to distinguish people from one another. In this case the original bearers of the surname Standing were named due to their close proximity to the stanton.

Early Origins of the Standing family

The surname Standing was first found in Nottinghamshire where they held a family seat from very ancient times, as Lords of the manor of Staunton. The first Lord was Sir Brian Staunton who was Lord of Staunton during the time of Edward the Confessor in 1047. [2] The family of Staunton of Staunton, in the first-named shire, "can be regularly traced from the time of the Conqueror, and there is no doubt of their having been settled in Nottinghamshire. in the time of Edward the Confessor." [2] "An ancient house, traced to the Conquest" [3]

Early History of the Standing family

The first dictionaries that appeared in the last few hundred years did much to standardize the English language. Before that time, spelling variations in names were a common occurrence. The language was changing, incorporating pieces of other languages, and the spelling of names changed with it. Standing has been spelled many different ways, including Stanton, Staunton and others.

Distinguished members of the family include Edmund Staunton (Stanton) (1600-1671), an English clergyman, chosen by Parliament as President of Corpus Christi College, Oxford; Thomas Stanton (1616?-1677), English-born, settler to America c. 1636, a trader and...
Another 35 words (2 lines of text) are included under the topic Early Standing Notables in all our PDF Extended History products and printed products wherever possible.

Migration of the Standing family to Ireland

Some of the Standing family moved to Ireland, but this topic is not covered in this excerpt.
Another 77 words (6 lines of text) about their life in Ireland is included in all our PDF Extended History products and printed products wherever possible.

Standing migration to the United States +

Thousands of English families in this era began to emigrate the New World in search of land and freedom from religious and political persecution. Although the passage was expensive and the ships were dark, crowded, and unsafe, those who made the voyage safely were rewarded with opportunities unavailable to them in their homeland. Research into passenger and immigration lists has revealed some of the very first Standings to arrive in North America:

Standing Settlers in United States in the 19th Century

Standing Settlers in United States in the 20th Century

Standing Settlers in New Zealand in the 19th Century