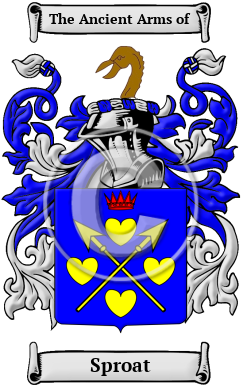 Early Origins of the Sproat family

The surname Sproat was first found in Derbyshire where the Domesday Book of 1086 lists the name was "derived from the name of an ancestor. 'the son of Sprot,'" [1]

From this earliest record, some of the family were found in Yorkshire as evidenced by Sprot de Spaldintona who was listed there in the Pipe Rolls of 1176. The same rolls also listed Willelmus filius Sprot at that time. [1]

Further to the north in Scotland, the name was "perhaps from Sprot, an Old English personal name, but more likely to be of Scandinavian origin. The tradition of those bearing this name in Scotland is that their ancestors were Saxons who came into Scotland after the Norman Conquest of England. The first recorded of the name in Scotland appears to be Hugh Sprot of Ur who witnessed a charter by Eustace Baliol granting the church and lands of Hur (Urr) in 1262 to the monks of Holyrood. " [4]

Back in England, Thomas Sprott or Spott (fl. 1270), was an English historian and monk of St. Augustine's, Canterbury, and wrote a history of that foundation at that time. [5]

Early History of the Sproat family

Spelling variations of this family name include: Sproat, Sprot, Sprott, Sprout and others.

Notables of this surname at this time include: William Sprot of Aberdeen; and Blessed Thomas Sprott (Spratt) (d. 1600), an English martyr. On the infamous side, George Sprott (d. 1608), was an English conspirator and alleged forger, practised as a notary at Eyemouth before and after 1600. "About that year he seems to have made the acquaintance of Robert Logan of Restalrig. Two years later Sprott let fall some incautious expressions to the effect that he had proofs...
Another 77 words (6 lines of text) are included under the topic Early Sproat Notables in all our PDF Extended History products and printed products wherever possible.

Migration of the Sproat family to Ireland

Some of the Sproat family moved to Ireland, but this topic is not covered in this excerpt. More information about their life in Ireland is included in all our PDF Extended History products and printed products wherever possible.

Sproat migration to the United States +

Sproat Settlers in United States in the 17th Century

Sproat Settlers in United States in the 18th Century

Sproat Settlers in United States in the 19th Century

Sproat Settlers in Australia in the 19th Century