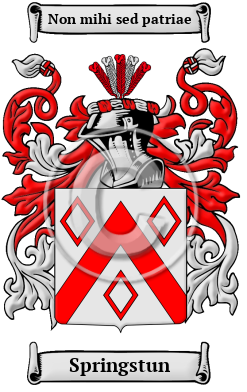 The name Springstun is part of the ancient legacy of the Anglo-Saxon tribes of Britain. Springstun was a name used for a young or very active individual, which was originally derived from the Old English word spring literally meaning the season spring. A broad and miscellaneous class of surnames, nickname surnames referred to a characteristic of the first person who used the name. They can describe the bearer's favored style of clothing, appearance, habits, or character. This nickname surname was used to describe the original bearers character as it related to the young shoots in the ground when they would rise from the earth in the spring.

Early Origins of the Springstun family

The surname Springstun was first found in Suffolk where they were major landowners in East Anglia seated from very ancient times, as Lords of the manor of Lavenham, the family were important merchants in the cloth and wool trade during the Middle Ages. The Spring or DeFonte family claim descendancy through Norman, Peter, William, Hugh de Fonte in Normandy who were listed there in a census (1180-1195.) The earliest record of the name in England was found c. 1198 when Reginald and Emma de Fonte were listed there at that time. [1] Houghton Le Side in Durham was an ancient family seat. "The vill was a portion of the inheritance of the early lords of Raby, and was granted by Robert Fitz-Mildred to the Springs, of whom Sir John Spring was, in 1312, murdered in his manorhouse here by Robert Lascelles, of Yorkshire." [2] and nearby in Houghton Le Spring more early evidence of the family was found. "This place, which takes its name from a family to whom it belonged soon after the Conquest, is one of the great manors of the see of Durham." [2]

Early History of the Springstun family

Until the dictionary, an invention of only the last few hundred years, the English language lacked any comprehensive system of spelling rules. Consequently, spelling variations in names are frequently found in early Anglo-Saxon and later Anglo-Norman documents. One person's name was often spelled several different ways over a lifetime. The recorded variations of Springstun include Spring, Springe, Springs, Springes, Springer and others.

Distinguished members of the family include Thomas Spring (c.1474-1523), also referred to as Thomas Spring III, and Thomas Spring of Lavenham, an English clothier in Suffolk and one of the richest men in England at the time; Sir John Spring (d. 1547), of Lavenham, Buxhall, Hitcham, and Cockfield, Suffolk, was an English merchant and politician; Sir William Spring of Lavenham (died 1599), an English politician and merchant, High Sheriff of Suffolk in 1578-1579; Sir William Spring of...
Another 77 words (6 lines of text) are included under the topic Early Springstun Notables in all our PDF Extended History products and printed products wherever possible.

Migration of the Springstun family to Ireland

Some of the Springstun family moved to Ireland, but this topic is not covered in this excerpt. More information about their life in Ireland is included in all our PDF Extended History products and printed products wherever possible.

Migration of the Springstun family

Thousands of English families boarded ships sailing to the New World in the hope of escaping the unrest found in England at this time. Although the search for opportunity and freedom from persecution abroad took the lives of many because of the cramped conditions and unsanitary nature of the vessels, the opportunity perceived in the growing colonies of North America beckoned. Many of the settlers who survived the journey went on to make important contributions to the transplanted cultures of their adopted countries. The Springstun were among these contributors, for they have been located in early North American records: Henry, Eleanor, John and his son John, Mary, William Spring all settled in Boston Massachusetts in 1634; Joan Spring and her husband Robert settled in Virginia in 1653.