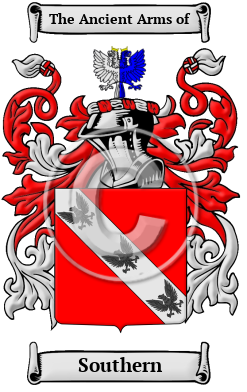 Early Origins of the Southern family

The surname Southern was first found in Suffolk at Sotherton, a parish, in the union and hundred of Blything. [1] This local name was derived from the term "the southern" meaning "from the south" and from the Middle English word "sothern." [2]

Perhaps Chaucer in his famous Canterbury Tales sums up this surname best "But trusteth wel, I am a sothern man."

Sutherne was a spelling used in Scotland in early days as shown by "Thomas le Sutherne was received to the English king's peace in 1321." [4]

Back in England, Yorkshire proved to be a popular county for the family as by the time of the Yorkshire Poll Tax Rolls of 1379, we found: Willelmus Sothom; Willelmus Sotheron; Johannes Sotheron; and Ricardus Sothryn as all holding lands there at that time. [2]

Early History of the Southern family

Spelling variations of this family name include: Southern, Sotherton, Sotherne, Sotheron and others.

Distinguished members of the family include John Southern or Soowthern (fl. 1584), and English "poetaster, seems to have been born in England, and was doubtless connected with...
Another 27 words (2 lines of text) are included under the topic Early Southern Notables in all our PDF Extended History products and printed products wherever possible.

In the United States, the name Southern is the 3,817th most popular surname with an estimated 7,461 people with that name. [5]

Migration of the Southern family to Ireland

Some of the Southern family moved to Ireland, but this topic is not covered in this excerpt.
Another 106 words (8 lines of text) about their life in Ireland is included in all our PDF Extended History products and printed products wherever possible.

Southern migration to the United States +

Southern Settlers in United States in the 17th Century

Southern Settlers in United States in the 19th Century

Southern Settlers in Australia in the 19th Century

Southern Settlers in New Zealand in the 19th Century

Southern Settlers in West Indies in the 17th Century