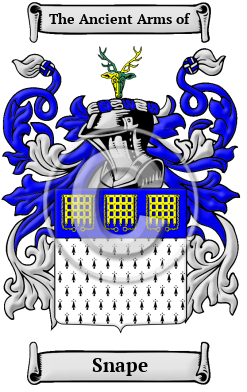 Early Origins of the Snape family

The surname Snape was first found in Oxfordshire where they held a family seat from very ancient times. Early records reveal Agnes del Snappe in a Huntingdonshire record of 1242; John atte Sneppe in the 1327 Subsidy Rolls of Sussex; and Robert de Snape in the 1355 Feet of Fines of Yorkshire. Later, we found Roger Snape in the 1525 Subsidy Rolls of Sussex. The name is derived from the Old English word "snaep" or the Old Norman word "snap" which means "dweller by the pasture."

Early History of the Snape family

Spelling variations of this family name include: Snape, Snappe, Snepe, Snapes and others.

Notables of the family at this time include Richard Snappe of Faller in Oxfordshire; Andrew Snape (the younger), serjeant farrier to Charles II, and author of The Anatomy of an Horse (1683); and his son, Andrew Snape (1675-1742), an English cleric, academic and headmaster, provost of King's College, Cambridge from 1719, he died in Windsor...
Another 54 words (4 lines of text) are included under the topic Early Snape Notables in all our PDF Extended History products and printed products wherever possible.

Snape migration to the United States +

Snape Settlers in United States in the 17th Century

Snape Settlers in Australia in the 19th Century

Snape Settlers in West Indies in the 17th Century

Historic Events for the Snape family +