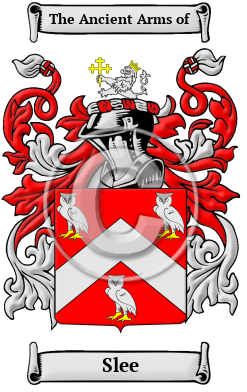 Early Origins of the Slee family

The surname Slee was first found in Essex, where Walter Sleh was listed in the Feet of Fines in 1219. Thomas Sleh, Slei, Slegh was listed in the Assize Rolls of Lincolnshire in 1219 and Robert Sley was listed in the Assize Rolls of Warwickshire in 1221. [1] The "epithet sly did not primarily imply anything dishonourable; though like 'crafty' and 'cunning' it has since come to be taken in a bad sense. The Slys or Sleighs were skilful men - cunning of hand. We are informed that Sly was anciently a common name in Shakespeare's own town. " [2] The Hundredorum Rolls of 1273 include: Ralph Sly in Hertfordshire; John Sley in Cambridgeshire; and John le Slege in Oxfordshire. [3] The hamlet of Ash in Derbyshire was an ancient family seat at one time. "The place was the property of the Sleigh family, from whom it came to the Chethams, and subsequently to the Cottons." [4]

Early History of the Slee family

Another 31 words (2 lines of text) are included under the topic Early Slee Notables in all our PDF Extended History products and printed products wherever possible.

Migration of the Slee family to Ireland

Some of the Slee family moved to Ireland, but this topic is not covered in this excerpt. More information about their life in Ireland is included in all our PDF Extended History products and printed products wherever possible.

Slee migration to the United States +

Slee Settlers in United States in the 17th Century

Slee Settlers in United States in the 19th Century

Slee Settlers in Canada in the 18th Century

Slee Settlers in Australia in the 19th Century