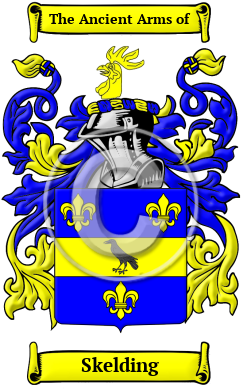 Early Origins of the Skelding family

The surname Skelding was first found in Cumberland, at Skelton, a parish in the union of Penrith. There are no fewer that five villages or parishes so named throughout northern Britain. None have derived their name from the rather obvious use of the term "skeleton" today. Rather each literally meant "farmstead on a shelf or ledge," from the Viking word "scelf" + "tun." [1] Furthermore, many of the villages or parishes date back to the Domesday Book or shortly after: Scheltun, Cleveland (1086); Shelton, Cumbria (c. 1160); Schilton, Humber (1086); Schelton, North Yorkshire (1086); and Scelton, North Yorkshire (12 century.) [1] "The Skeltons of Cumberland date back to temp. Edward I." [2]

By the 11th century the family had acquired Armathwaite Castle in Cumberland, and later branched to Branthwaite and High House in that shire. "Armathwaite Castle [in Cumberland], a handsome modern edifice, built on the site of an ancient fortress, occupies a rocky elevation, at the foot of which flows the Eden; in the reign of Henry VIII. it was, with the estate, the property of John Skelton (c. 1463-1529), the poet-laureat. The chapel was rebuilt by Richard Skelton in 1668, having for some time previously been used as a shed for cattle." [3]

Another source claims the family was from Lincolnshire as "one of the first ministers of Salem, Massachusetts, Samuel Skelton, was a nonconforming minister of Lincolnshire." [4] We respectfully disagree with this latter source's claim as the lion's share of early records were from further north and this entry was from some four hundred years after the first entries.

The Skeldon variant is an interesting one. Apart from the obvious phonetic similarity, some sources merge the entries and others do not. Reaney and Wilson claim one of the first entries for this variant was John Skeldyng who was listed in the Register of Freemen of York in 1463. And in this case, the family originated in Skelding, a township in the parish of Ripon in the West Riding of Yorkshire. [5] All of the Skelding entries that we could find were some two hundred years after the first Skelton entries, so we presume that the Skelding variant is of later stock, particularly as this name too originates in the Yorkshire, Cumberland area of Britain.

As one would expect, the close proximity to Scotland could encourage some of the family to migrate there. Archibald Skeldin, was burgess of Edinburgh, 1569 and the family may have originated Skeldoun in Kyle-Regis. "It may otherwise be from Skeldon in Yorkshire or from Skeldon in Northumberland." [7]

Early History of the Skelding family

Spelling variations of this family name include: Skelton, Skeldon and others.

Notable amongst the family at this time was John Skelton, also known as John Shelton (c.1460-1529), probably born in Diss, Norfolk, an English poet; John Skelton, High Sheriff of...
Another 29 words (2 lines of text) are included under the topic Early Skelding Notables in all our PDF Extended History products and printed products wherever possible.

Migration of the Skelding family to Ireland

Some of the Skelding family moved to Ireland, but this topic is not covered in this excerpt.
Another 91 words (6 lines of text) about their life in Ireland is included in all our PDF Extended History products and printed products wherever possible.

Skelding migration to the United States +

Skelding Settlers in United States in the 19th Century

Skelding Settlers in Australia in the 19th Century