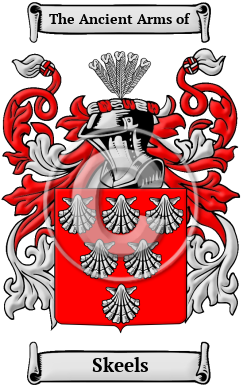 In allusion to the earlier "Escaliers," the seal of Hugh de Scales, attached to a grant of some churches to Lewes Priory, shows an armed man, putting his right foot on the step of a ladder, and with his hands resting upon it, as in the act of climbing. [2]

Its origin is apparently not Norman, as it is not found in the Duchy till the time of Philip Augustus. It was probably derived from Acquitaine, where the Viscounts of Scales had been of importance since the time of Charles Martel, c. 730, at which epoch they had a grant of the ruined Abbey of Tulle and its estates. These were restored to the church by Aldemar, Viscount of Scales, 930. Gausbert, his brother, was ancestor of the family of Scales, which continued at Limoges, 1201. Harduin de Scallers or de Scallariis (probably one of this family), had extensive grants in Herts and Cambridge 1066, and he and his posterity also held three knight's fees in Yorkshire by gift of Alan, Earl of Richmond." [1]

Early Origins of the Skeels family

The surname Skeels was first found in Hertfordshire. Hardwin de Scalers landed with William the Conqueror and was ancestor of the noble family of Eschalers, or Scales. The name was frequently spelt De Scales about the time of Henry III. [3]

Soon after 1086, Earl Alan granted Smeaton, part of his demesne near Richmond, to Harduin's son Malger; and in the time of Stephen, Turgis Fitz Malger was a benefactor of Fountains Abbey ; his son William de Scalers confirmmg his giftsHugh de Scalers, the contemporary, and perchance the near kinsman of the latter, founded a baronial family of high estate and ample possessions. "Their castle at Middleton, near Lynn, in Norfolk, was a magnificent building; and though now in ruins, yet they bespeak the dignity and power of the founder, and the difference between ancient and modern nobility." [2]

Hugh's barony included Whaddon in Cambridgeshire (held by Harduin at the Conquest); with Berkhempstead in Essex, and he transmitted in all fifteen knight's fees to his descendants. The line is regularly traced to his great-grandson Geoffrey, the successor of an elder brother who had died on pilgrimage to Jerusalem in 1220. [2]

The Hundredorum Rolls of 1273 list the following early spellings of the family: Dionise Schayl in Cambridgeshire; Philip Schayl in Huntingdonshire; and Walter Schayl in Oxfordshire. [4]

Sir Robert de Scales, was Lord of the Manors of Bedenested and Scolegh in Essex, Parva Willington in Kent and Lynne, Middelton and Ilsington in Norfolk (1232-1233.) [5]

Lord Robert de Scales (died 1304) was a Knight Templar and loyal supporter of Edward I in his campaigns in Wales, Scotland, France and Flanders. [6]

Thomas de Scales, 7th Lord Scales (ca. 1399-1460), was younger son of Robert, 5th Lord Scales. "Like his brother, he took an active part in the French wars. In 1422 he went over to France with a company of men, for whom he contracted to receive regular wages, and from that time onwards he served under John, Duke of Bedford." [6]

Early History of the Skeels family

This web page shows only a small excerpt of our Skeels research. Another 86 words (6 lines of text) covering the years 1290, 1372, 1402, 1399 and 1401 are included under the topic Early Skeels History in all our PDF Extended History products and printed products wherever possible.

Before English spelling was standardized a few hundred years ago, spelling variations of names were a common occurrence. Elements of Latin, Norman French and other languages became incorporated into English throughout the Middle Ages, and name spellings changed even among the literate. The variations of the surname Skeels include Scale, Scales, Scalers and others.

Another 33 words (2 lines of text) are included under the topic Early Skeels Notables in all our PDF Extended History products and printed products wherever possible.

Migration of the Skeels family to Ireland

Some of the Skeels family moved to Ireland, but this topic is not covered in this excerpt. More information about their life in Ireland is included in all our PDF Extended History products and printed products wherever possible.

Skeels Settlers in New Zealand in the 19th Century