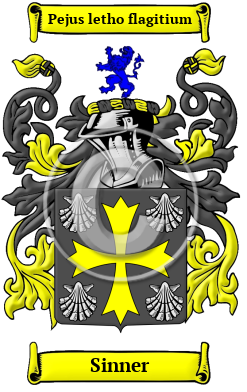 Sinner is a name that was brought to England by the ancestors of the Sinner family when they emigrated following the Norman Conquest of 1066. The name Sinner comes from the Norman personal name Samson.

Early Origins of the Sinner family

The surname Sinner was first found in Gloucestershire, but the family was quickly scattered throughout Britain as they claim descendancy from "De St. Sampson, from the lordship near Caen, Normandy. Ralph de St. Sansom accompanied the Conqueror, and [by] 1086 held estates in several counties. William Sampson, his descendant, was summoned to Parliament as a Baron 1297-1304. " [1]

Another reference notes "Samson, the name of a Welsh bishop (fl. 550) who crossed over to Brittany and founded the abbey of Dol where he was buried and venerated as a saint. Whether his name is the Biblical Samson or one of Celtic origin is uncertain. The name was popular in Yorkshire and eastern counties." [2]

Samsom (died 1112), was and English divine, Bishop of Worcester, born at Douvres near Caen, was the son of Osbert and Muriel, who were of noble lineage.

Samsom (1135-1211), was Abbot of St. Edmund's, born at Tottington, near Thetford in Norfolk. "When nine years old he was taken by his mother on a pilgrimage to St. Edmund's. 'As a poor clerk,' he received gratuitous instruction from a schoolmaster named William of Diss. " [3]

Early History of the Sinner family

A multitude of spelling variations characterize Norman surnames. Many variations occurred because Old and Middle English lacked any definite spelling rules. The introduction of Norman French to England also had a pronounced effect, as did the court languages of Latin and French. Therefore, one person was often referred to by several different spellings in a single lifetime. The various spellings include Sampson, Samson and others.

Outstanding amongst the family at this time was Nicolas Sanson (1600-1667), a French cartographer of Scottish descent; William Sampson (1590?-1636?), an English dramatist from Retford, Nottinghamshire; and his son, Henry Sampson (1629?-1700), an English nonconformist minister and physician. Born at South Leverton, Nottinghamshire, and after the Restoration, he preached for some time privately at Framlingham, and founded an independent congregation, which still exists. Turning to medicine, he studied at Padua and at Leyden, where he graduated M.D. on 12 July 1668. He practised in London, and was admitted an honorary fellow of the College of Physicians on 30 Sept. 1680. [3] Richard...
Another 100 words (7 lines of text) are included under the topic Early Sinner Notables in all our PDF Extended History products and printed products wherever possible.

Migration of the Sinner family to Ireland

Some of the Sinner family moved to Ireland, but this topic is not covered in this excerpt. More information about their life in Ireland is included in all our PDF Extended History products and printed products wherever possible.

Sinner migration to the United States +

Many English families left England, to avoid the chaos of their homeland and migrated to the many British colonies abroad. Although the conditions on the ships were extremely cramped, and some travelers arrived diseased, starving, and destitute, once in the colonies, many of the families prospered and made valuable contributions to the cultures of what would become the United States and Canada. Research into the origins of individual families in North America has revealed records of the immigration of a number of people bearing the name Sinner or a variant listed above:

Sinner Settlers in United States in the 17th Century

Sinner Settlers in United States in the 18th Century

Sinner Settlers in United States in the 19th Century

Sinner Settlers in Australia in the 19th Century