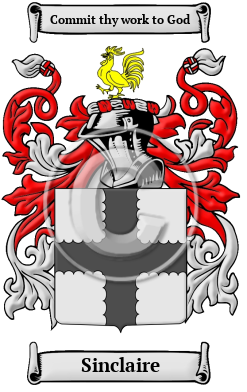 The Sinclaire surname was a Norman habitation name, derived from when families lived at St. Clai-sur-Elle in La Manche and in St-Clair-L'Evêque in Calvados, Normandy where the site of the seignorial castle is still discernible. [1]

Early Origins of the Sinclaire family

The surname Sinclaire was first found in the barony of Roslyn, Midlothian where King Alexander I of Scotland granted a parcel of land to William de Sancto Claro in 1162. They were originally from St Clare, Pont d'Eveque, Normandy, and are descended from Walderness Compte de Saint Clare who arrived in England with William the Conqueror.

Early History of the Sinclaire family

Notable among the family at this time was Henry I Sinclair, Earl of Orkney, Baron of Roslin (c. 1345-1400), Scottish and a Norwegian nobleman; Prince of Orkney, 3rd Earl of Orkney; and George Sinclair or Sinclar (d. 1696), a Scottish mathematician, engineer and demonologist, the first Professor of Mathematics, Glasgow, probably a native of East Lothian. Other notables include: George Sinclair fourth Earl of Caithness (d. 1582), second, but eldest surviving, son of John, third Earl of Caithness; and George Sinclair, fifth Earl...
Another 82 words (6 lines of text) are included under the topic Early Sinclaire Notables in all our PDF Extended History products and printed products wherever possible.

Migration of the Sinclaire family to Ireland

Some of the Sinclaire family moved to Ireland, but this topic is not covered in this excerpt.
Another 59 words (4 lines of text) about their life in Ireland is included in all our PDF Extended History products and printed products wherever possible.

Sinclaire migration to the United States +

Sinclaire Settlers in United States in the 19th Century