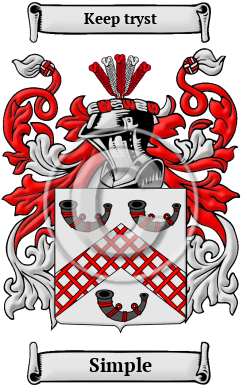 Early Origins of the Simple family

The surname Simple was first found in Renfrewshire (Gaelic: Siorrachd Rinn Friù), a historic county of Scotland, today encompassing the Council Areas of Renfrew, East Renfrewshire, and Iverclyde, in the Strathclyde region of southwestern Scotland, where they held a family seat from early times and their first records appeared on the early census rolls taken by the early Kings of Scotland to determine the rate of taxation of their subjects.

Early History of the Simple family

Spelling variations of this family name include: Semple, Simple, Sempill, Sempell, Symple, Sympell and many more.

Notable amongst the family at this time was Lord George Sempill; and Sir James Sempill (1566-1625), Scottish Ambassador to England (1591-1600); Robert Sempill, the Younger (1595?-1663?), Scottish poet, best known for his ballad, "The Life and Death of Habbie Simpson, Piper of Kilbarchan" (c. 1640); and Francis Sempill (1616?-1682), Deputy Sheriff of Renfrewshire (1667.) [1] Hugh Sempill or Semple (1596-1654), was a Scottish mathematician, born at Craigevar and was was nephew of Colonel William Sempill. Sir James Sempill (1566-1625) of Beltrees, called by Knox 'the dancer,' was eldest son of John Sempill. His father and mother were special favourites of the queen...
Another 126 words (9 lines of text) are included under the topic Early Simple Notables in all our PDF Extended History products and printed products wherever possible.

Migration of the Simple family to Ireland

Some of the Simple family moved to Ireland, but this topic is not covered in this excerpt.
Another 123 words (9 lines of text) about their life in Ireland is included in all our PDF Extended History products and printed products wherever possible.

Simple migration to the United States +

Simple Settlers in United States in the 17th Century

Simple Settlers in United States in the 18th Century

Simple Settlers in United States in the 19th Century