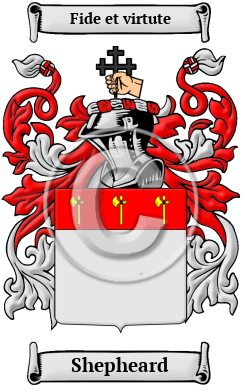 The name Shepheard is from the ancient Anglo-Saxon tribes of Britain. The name was given to a person who was a person who worked as a shepherd, the guardian of the sheep. [1] [2]

Occupational names that were derived from the common trades of the medieval era transcended European cultural and linguistic boundaries. Occupational names frequently were derived from the principal object associated with the activity of the original bearer, such as tools or products. These types of occupational surnames are called metonymic surnames. In this case the surname was originally derived from the Old English word sceap, meaning sheep and hierde meaning herdsman. While this traditional understand of the surname's meaning is in many ways self explanatory today, in examining the Coat of Arms invariably we find battle axes. This is not surprising as the ancient shepherds were employed to dig sod around the embattlements of a Saxon village as a means of defense, hence the term "the shepherd's ring." Their tools were battle axes.

Early Origins of the Shepheard family

The surname Shepheard was first found in the Southern counties of England, where they could be found from early times. Early recorded instances of the name include William Sepherd listed in Rotuli Hundredorum, in Oxfordshire in 1279. [3] The same rolls listed Margaret le Sephirde in Huntingdonshire and Walter le Schepherde in Cambridgeshire. [4]

Early History of the Shepheard family

Sound was what guided spelling in the essentially pre-literate Middle Ages, so one person's name was often recorded under several variations during a single lifetime. Also, before the advent of the printing press and the first dictionaries, the English language was not standardized. Therefore, spelling variations were common, even among the names of the most literate people. Known variations of the Shepheard family name include Shepherd, Shephard, Sheppard, Sheppeard, Shepperd and others.

Distinguished members of the family include Shepherd, alias Thwattes, of Derbyshire, who were a noble family during the reign of Henry IV (ruled 1399-1413); John Sheppard (c.1515-1559) English composer & organist, considered one of the finest English church composers of the Tudor era; Thomas Shepard (1605-1649), born in Towcester...
Another 49 words (4 lines of text) are included under the topic Early Shepheard Notables in all our PDF Extended History products and printed products wherever possible.

Migration of the Shepheard family to Ireland

Some of the Shepheard family moved to Ireland, but this topic is not covered in this excerpt.
Another 65 words (5 lines of text) about their life in Ireland is included in all our PDF Extended History products and printed products wherever possible.

Shepheard migration to the United States +

For political, religious, and economic reasons, thousands of English families boarded ships for Ireland, the Canadas, the America colonies, and many of smaller tropical colonies in the hope of finding better lives abroad. Although the passage on the cramped, dank ships caused many to arrive in the New World diseased and starving, those families that survived the trip often went on to make valuable contributions to those new societies to which they arrived. Investigation of the origins of family names on the North American continent has revealed that early immigrants bearing the name Shepheard or a variant listed above:

Shepheard Settlers in United States in the 17th Century

Shepheard Settlers in United States in the 18th Century

Shepheard Settlers in Australia in the 19th Century