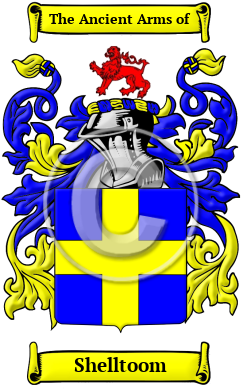 The ancient history of the Shelltoom name begins with the ancient Anglo-Saxon tribes of Britain. The name is derived from when the family resided in the township of Shelton found in five counties in England. Bedfordshire, Norfolk, Nottinghamshire, Salop and Staffordshire all had townships by the name of Shelton. This place-name was originally derived by the Old English elements scylf and tun, which denoted a ledge or plateau in the landscape. [1]

Early Origins of the Shelltoom family

The surname Shelltoom was first found in Norfolk at Shelton, a parish, in the union and hundred of Defwade. "This place was anciently the property of the Sheltons, who were owners of the Hall, a castellated structure long since pulled down. From that family the estate passed to Sir Robert Houghton, one of the justices of the king's bench." [2]

Early History of the Shelltoom family

Until quite recently, the English language has lacked a definite system of spelling rules. Consequently, Anglo-Saxon surnames are characterized by a multitude of spelling variations. Changes in Anglo-Saxon names were influenced by the evolution of the English language, as it incorporated elements of French, Latin, and other languages. Although Medieval scribes and church officials recorded names as they sounded, so it is common to find one person referred to by several different spellings of his surname, even the most literate people varied the spelling of their own names. Variations of the name Shelltoom include Shelton, Sheltone and others.

Notables of this surname at this time include: John Shelton, also known as John Skelton (c.1460-1529), an English poet; Rauf Shelton of Yorkshire; Anne Shelton nee Boleyn (1475-1555), aunt of Anne Boleyn, second wife of Henry VIII; and Sir John Shelton (1476-1539), courtier during the reign of Henry VIII of England. Thomas Shelton (fl. 1612), was the first translator of 'Don Quixote' into English, may possibly be identical with the Thomas Sheldon who was fourth son of William Sheldon of Broadway, Worcestershire, a kinsman of Edward Sheldon, of Beoley. [3] Thomas Shelton (1601-1650?), was an English stenographer, descended from an old Norfolk family...
Another 144 words (10 lines of text) are included under the topic Early Shelltoom Notables in all our PDF Extended History products and printed products wherever possible.

Migration of the Shelltoom family to Ireland

Some of the Shelltoom family moved to Ireland, but this topic is not covered in this excerpt.
Another 41 words (3 lines of text) about their life in Ireland is included in all our PDF Extended History products and printed products wherever possible.

Migration of the Shelltoom family

Searching for a better life, many English families migrated to British colonies. Unfortunately, the majority of them traveled under extremely harsh conditions: overcrowding on the ships caused the majority of the immigrants to arrive diseased, famished, and destitute from the long journey across the ocean. For those families that arrived safely, modest prosperity was attainable, and many went on to make invaluable contributions to the development of the cultures of the new colonies. Research into the origins of individual families in North America revealed records of the immigration of a number of people bearing the name Shelltoom or a variant listed above: Richard and Francis Shelton who settled in Virginia in 1638; Samuel and Esther Shelton settled in Boston Massachusetts in 1765 with Hannah; Samuel Shelton settled in Barbados with his servants in 1680.