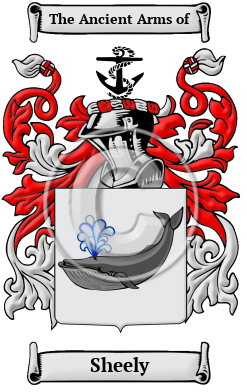 Early Origins of the Sheely family

The surname Sheely was first found in Cork (Irish: Corcaigh) the ancient Kingdom of Deis Muin (Desmond), located on the southwest coast of Ireland in the province of Munster, where they held a family seat as an offshoot of the Cahills, being directly descended from Tomhas na Sealbuide, or Thomas of the Seals. Irish history was greatly influenced by the Norman invasion of 1172, and thereafter, the surnames of Irish Gaelic clanns and septs and many of the Norman families became almost indistinguishable. This family name was found later in Clare where the name assumed Shalloo and represented the first recorded reference to the name.

Early History of the Sheely family

This web page shows only a small excerpt of our Sheely research. Another 73 words (5 lines of text) are included under the topic Early Sheely History in all our PDF Extended History products and printed products wherever possible.

More information is included under the topic Early Sheely Notables in all our PDF Extended History products and printed products wherever possible.

In the United States, the name Sheely is the 16,004th most popular surname with an estimated 2,487 people with that name. [1]

Sheely migration to the United States +

Sheely Settlers in United States in the 17th Century

Sheely Settlers in United States in the 18th Century

Sheely Settlers in United States in the 19th Century