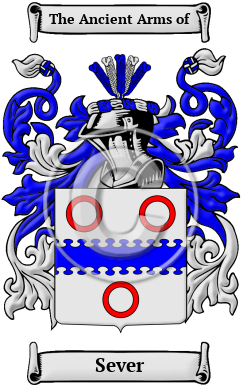 Early Origins of the Sever family

The surname Sever was first found in Somerset where the mononymous Seuare was a Knights Templar in 1185. The name was derived from the Old English woman's name for "sea passage."

Early History of the Sever family

This web page shows only a small excerpt of our Sever research. Another 64 words (5 lines of text) covering the years 1279, 1327, 1616, 1471, 1427 and 1440 are included under the topic Early Sever History in all our PDF Extended History products and printed products wherever possible.

Distinguished members of the family include Henry Sever (d. 1471), First Provost of Eton College and Warden of Merton. In 1427, he served as Senior Proctor in the University. He...
Another 29 words (2 lines of text) are included under the topic Early Sever Notables in all our PDF Extended History products and printed products wherever possible.

In the United States, the name Sever is the 17,565th most popular surname with an estimated 2,487 people with that name. [4]

Sever migration to the United States +

Sever Settlers in United States in the 17th Century

Sever Settlers in United States in the 18th Century

Sever Settlers in Canada in the 18th Century