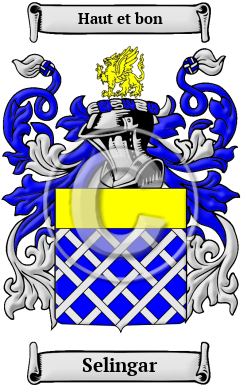 Selingar is a name of ancient Norman origin. It arrived in England with the Norman Conquest of 1066. Selingar is a name that comes from St. Leger. "The St. Legers came from Caen in Normandy (Chron. of Battel Abbey, p. 59), and a family tradition asserts that the patriarch, Robert, was not only present at William's invasion in 1066, but actually supported him with his hand as he quitted the ship! There are six places bearing this name mentioned in the Itin. de la Normandie. Its Latinization is De Sancto." [1]

Early Origins of the Selingar family

The surname Selingar was first found in Kent where Robert St. Leger was granted estates at Ulcombe and became Lord of the Manor of Ulcombe. "Ulcombe Place and manor belonged to the family of St. Leger, of whom Sir Robert, of an ancient house in Normandy, is said to have supported the Conqueror with his hand when landing on the Sussex coast. The present edifice, [(church)] which is in the later English style, contains some very old monuments to the St. Legers." [3] He also held estates at Bexhill in Sussex.

Early History of the Selingar family

Anglo-Norman names are characterized by a multitude of spelling variations. When the Normans became the ruling people of England in the 11th century, they introduced a new language into a society where the main languages of Old and later Middle English had no definite spelling rules. These languages were more often spoken than written, so they blended freely with one another. Contributing to this mixing of tongues was the fact that medieval scribes spelled words according to sound, ensuring that a person's name would appear differently in nearly every document in which it was recorded. The name has been spelled St.Leger, Leger, Legere, Sallinger, Sellinger, St. Ledger and many more.

Outstanding amongst the family at this time was Sir Thomas St Leger KB (c. 1440-1483) second son of Sir John St Leger (d.1441) of Ulcombe, Kent, and his wife, Margery Donnet. He was executed on 13 November 1483, at Exeter Castle, despite the offer of large sums of money on his behalf. Sir John St Leger (died 1596), of Annery in the parish of Monkleigh, Devon, was an English landowner who served in local and national government. He was the son of Sir George St Leger (c.1475-1536), of Annery, by his wife, Anne Knyvett, daughter of Sir Edmund Knyvett of Buckenham. He...
Another 182 words (13 lines of text) are included under the topic Early Selingar Notables in all our PDF Extended History products and printed products wherever possible.

Migration of the Selingar family to Ireland

Some of the Selingar family moved to Ireland, but this topic is not covered in this excerpt.
Another 249 words (18 lines of text) about their life in Ireland is included in all our PDF Extended History products and printed products wherever possible.

Migration of the Selingar family

For many English families, the political and religious disarray that plagued their homeland made the frontiers of the New World an attractive prospect. Thousands migrated, aboard cramped disease-ridden ships. They arrived sick, poor, and hungry, but were welcomed in many cases with far greater opportunity than at home in England. Many of these hardy settlers went on to make important contributions to the emerging nations in which they landed. Among early immigrants bearing the name Selingar or a variant listed above were: John St. Ledger settled in Canada in 1841; William St. Leger settled in New Orleans in 1823.