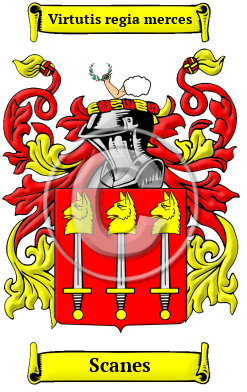 The Scanes surname is thought to be derived from the Aberdeenshire parish of the same name. Legend has it that the first bearer of the name was second son of Struan Robertson, who saved king Malcolm II (circa 1014) by slaying a wolf with his "sgian," or "skene," (Scottish dagger) in Stocket Forest. which meant "a dagger." It is said that he was rewarded with the lands of Skene and henceforth used the name Skene. [1]

"The Skenes obtained this name for killing a very big and fierce wolf, at a hunting in company with the king, in Stocket forest in Athole; having killed the wolf with a dagger or skene." [2]

"Some derive their names as well as their arms from some considerable action, and thus a son of Struan Robertson, for killing a wolf in Stocket forest in Athole, in the king's presence, with a dirk, received the name of Skene, which signifies a dirk, and three dirks points in pale, for his arms." [3]

Early Origins of the Scanes family

The surname Scanes was first found in Aberdeenshire (Gaelic: Siorrachd Obar Dheathain), a historic county, and present day Council Area of Aberdeen, located in the Grampian region of northeastern Scotland, where they held a family seat sometime before the year 1250. The family had always maintained the rank of free Barons and held the Castle Skene, and the Earldom of Mar in Aberdeen.

The family is "of territorial origin from the lands of Skene, Aberdeenshire, erected into a barony in 1317 in favor of Robert de Skene. The first record of the name is in 1296 when Johan de Skene of the county of Edneburk and Johan de Skene of the county of Aberdene rendered homage [to King Edward I of England]. Probably, like many other old families, the Skenes were hereditary possessors of the church of Skene, a vicarage dependent upon the church of Kinkell, and toox their name from it. This supposition is rendered probable by the designation of Patrick as a cleric, and by the fact that in 1358 a Giliane de Skene is mentioned who is probably a descendant of the John de Skene who bore the head of John the Baptist on his seal." [4]

Early History of the Scanes family

Spelling variations of this family name include: Skene, Skeyne, Skeen, Skeene, Skin and many more.

Notable amongst the Clan at this time was Sir John Skene (1543-1617), who acquired Curriehill (taking the title Lord Curriehill); he was a much published lawyer in Scotland, who compiled...
Another 30 words (2 lines of text) are included under the topic Early Scanes Notables in all our PDF Extended History products and printed products wherever possible.

Migration of the Scanes family to Ireland

Some of the Scanes family moved to Ireland, but this topic is not covered in this excerpt.
Another 55 words (4 lines of text) about their life in Ireland is included in all our PDF Extended History products and printed products wherever possible.

Migration of the Scanes family

Some of the first settlers of this family name or some of its variants were: John Skene who settled in West New Jersey in 1664; Robert Skene, who was on record in Maryland in 1700; Thomas Skene, who arrived in South Carolina in 1760.