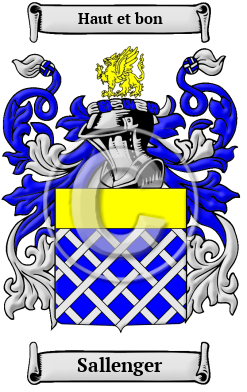 The name Sallenger reached English shores for the first time with the ancestors of the Sallenger family as they migrated following the Norman Conquest of 1066. The name Sallenger is based on St. Leger. "The St. Legers came from Caen in Normandy (Chron. of Battel Abbey, p. 59), and a family tradition asserts that the patriarch, Robert, was not only present at William's invasion in 1066, but actually supported him with his hand as he quitted the ship! There are six places bearing this name mentioned in the Itin. de la Normandie. Its Latinization is De Sancto." [1]

Early Origins of the Sallenger family

The surname Sallenger was first found in Kent where Robert St. Leger was granted estates at Ulcombe and became Lord of the Manor of Ulcombe. "Ulcombe Place and manor belonged to the family of St. Leger, of whom Sir Robert, of an ancient house in Normandy, is said to have supported the Conqueror with his hand when landing on the Sussex coast. The present edifice, [(church)] which is in the later English style, contains some very old monuments to the St. Legers." [3] He also held estates at Bexhill in Sussex.

Early History of the Sallenger family

It is only in the last few hundred years that the English language has been standardized. For that reason, Anglo-Norman surnames like Sallenger are characterized by many spelling variations. Scribes and monks in the Middle Ages spelled names they sounded, so it is common to find several variations that refer to a single person. As the English language changed and incorporated elements of other European languages such as Norman French and Latin, even literate people regularly changed the spelling of their names. The variations of the name Sallenger include St.Leger, Leger, Legere, Sallinger, Sellinger, St. Ledger and many more.

Outstanding amongst the family at this time was Sir Thomas St Leger KB (c. 1440-1483) second son of Sir John St Leger (d.1441) of Ulcombe, Kent, and his wife, Margery Donnet. He was executed on 13 November 1483, at Exeter Castle, despite the offer of large sums of money on his behalf. Sir John St Leger (died 1596), of Annery in the parish of Monkleigh, Devon, was an English landowner who served in local and national government. He was the son of Sir George St Leger (c.1475-1536), of Annery, by his wife, Anne Knyvett, daughter of Sir Edmund Knyvett of Buckenham. He...
Another 182 words (13 lines of text) are included under the topic Early Sallenger Notables in all our PDF Extended History products and printed products wherever possible.

Migration of the Sallenger family to Ireland

Some of the Sallenger family moved to Ireland, but this topic is not covered in this excerpt.
Another 249 words (18 lines of text) about their life in Ireland is included in all our PDF Extended History products and printed products wherever possible.

Sallenger migration to the United States +

Faced with the chaos present in England at that time, many English families looked towards the open frontiers of the New World with its opportunities to escape oppression and starvation. People migrated to North America, as well as Australia and Ireland in droves, paying exorbitant rates for passages in cramped, unsafe ships. Many of the settlers did not make the long passage alive, but those who did see the shores of North America were welcomed with great opportunity. Many of the families that came from England went on to make essential contributions to the emerging nations of Canada and the United States. Some of the first immigrants to cross the Atlantic and come to North America carried the name Sallenger, or a variant listed above:

Sallenger Settlers in United States in the 17th Century