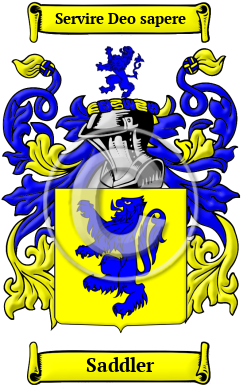 The saga of the name Saddler follows a line reaching back through history to the days of the Anglo-Saxon tribes in Britain. It was a name for someone who worked as a person who made saddles. Saddler is an occupational surname, which belongs to the category of hereditary surnames. Nicknames form a broad and miscellaneous class of surnames, and can refer directly or indirectly to one's personality, physical attributes, mannerisms, or even their habits of dress. The surname Saddler comes from the Old English and Old German word sadel, which was an occupational name for a maker of saddles.

Early Origins of the Saddler family

The surname Saddler was first found in Wiltshire where they held a family seat from early times at Everley.

"This place, at the time of the heptarchy, was the residence of Ina, King of the West Saxons; it subsequently belonged for many generations to the Plantagenets, dukes of Lancaster. The manor was granted by Edward VI., in the first year of his reign, to Edward, Duke of Somerset, Protector, after whose attainder, reverting to the crown, it was given by Queen Elizabeth to Sir Ralph Sadlier, Knt., the royal falconer, whose son and successor had the honour of entertaining James I. at the manor-house, on the 31st of August, 1603." [1]

Early History of the Saddler family

Before the last few hundred years, the English language had no fast system of spelling rules. For that reason, spelling variations are commonly found in early Anglo-Saxon surnames. Over the years, many variations of the name Saddler were recorded, including Sadler, Sadlar, Sadleigh, Sadlier, Sadleir and many more.

Notables of this surname at this time include: The Right Honourable Sir Ralph Sadler, PC, Knight banneret, (1507-1587), who served as a Secretary of State for King Henry VIII; Sir Edwyn Sadlier, 1st Baronet (c. 1620-1672); John Sadler of Warmwell (1615-1674), an English lawyer, academic, Member of Parliament, Town Clerk of London (1649 to 1660); and Sir Edwin Sadlier, 2nd Baronet (c. 1656-1719) of Temple Dinsey in the County of Hertford. John Sadler (died 1565)...
Another 74 words (5 lines of text) are included under the topic Early Saddler Notables in all our PDF Extended History products and printed products wherever possible.

In the United States, the name Saddler is the 4,989th most popular surname with an estimated 4,974 people with that name. [2]

Migration of the Saddler family to Ireland

Some of the Saddler family moved to Ireland, but this topic is not covered in this excerpt.
Another 50 words (4 lines of text) about their life in Ireland is included in all our PDF Extended History products and printed products wherever possible.

Saddler migration to the United States +

To escape oppression and starvation at that time, many English families left for the "open frontiers" of the New World with all its perceived opportunities. In droves people migrated to the many British colonies, those in North America in particular, paying high rates for passages in cramped, unsafe ships. Although many of the settlers did not make the long passage alive, those who did see the shores of North America perceived great opportunities before them. Many of the families that came from England went on to make essential contributions to the emerging nations of Canada and the United States. Research into various historical records revealed some of first members of the Saddler family emigrate to North America:

Saddler Settlers in United States in the 18th Century

Saddler Settlers in Australia in the 19th Century

Historic Events for the Saddler family +

Motto: Servire Deo sapere
Motto Translation: To serve God is to be wise