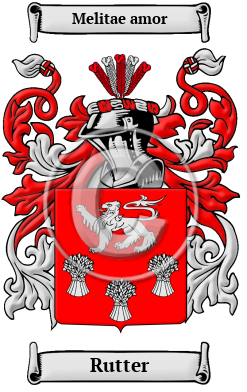 Early Origins of the Rutter family

The surname Rutter was first found in Cheshire where it "is the name of an ancient and influential family of Kingsley, where they owned considerable estates from the 13th to the 17th century (O.). The name of Rutter is now best represented amongst the farmers around Tarporley, which is only some seven or eight miles from Kingsley, so that we may repeat the remark made by Ormerod about 70 years ago "that the descendants are still living (as yeomen) and day labourers within the precincts of the feudal power of their ancestors." The name is also established in the counties of Northumberland, Durham, and Lincoln, and in the North and East Ridings of Yorkshire. " [1]

As far as the etymology of the name, there is much debate. Most sources claim the name is from the German word for "ritter, a rider, i.e. a trooper." [2] [3] [2] [4] Halliwell goes on the note that "the term was usually applied to a fine, dashing, boasting gallant; one so fashionable as to speak much in foreign languages." [3]

However, one source claims the name was in fact, a Norman French name from "Roter" as the Magni Rotuli Scaccarii Normanniae lists Fulco des Rotors, Normandy 1180-1195; and Fulco de Rotor, 1198 and then notes that Richard and Thomas Rotor or Rotour, were both listed in the Hundredorum Rolls of 1273. [5]

Early History of the Rutter family

Spelling variations of this family name include: Rutter, Ruttery, Rutty and others.

Distinguished members of the family include John Rutty (1697-1775) a Dublin Quaker physician and naturalist born in Melksham, Wiltshire; and his cousin, William Rutty M.D. (1687-1730) was an English physician, elected a Fellow of the Royal Society 30 June 1720 and later became second secretary 30 November 1727. John Rutter (fl. 1635), was an English poet who belonged to Ben Jonson's latest circle of friends...
Another 64 words (5 lines of text) are included under the topic Early Rutter Notables in all our PDF Extended History products and printed products wherever possible.

Rutter migration to the United States +

Rutter Settlers in United States in the 17th Century

Rutter Settlers in United States in the 18th Century

Rutter Settlers in United States in the 19th Century

Rutter Settlers in United States in the 20th Century

Rutter Settlers in Canada in the 18th Century

Rutter Settlers in Australia in the 19th Century

Rutter Settlers in New Zealand in the 19th Century

Rutter Settlers in West Indies in the 17th Century

Historic Events for the Rutter family +