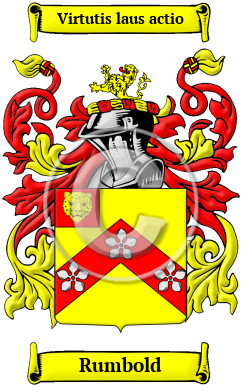 The name Rumbold originated with the Anglo-Saxon tribes that once ruled Britain. It is derived from Rumbald, an Old German personal name. This name came to England in the wake of the Norman Conquest in 1066, as King William encouraged the immigration from continental Europe of skilled tradesmen and artisans; many of these immigrants came from Germany. Saint Rumwold (Rumbold) was a medieval infant saint in England, said to have lived for three days in 662. He is said to have been full of Christian piety despite his young age, and able to speak from the moment of his birth, requested baptism, and delivered a sermon prior to his early death. Another Saint Rumbold (Rumold, Romuold) (died 775) was an Irish or Scottish Christian missionary who was martyred near Mechelen by two men, whom he had denounced for their evil ways. St. Rumbold's Cathedral is found in Mechelen, Belgium and it is here that his remains are generally thought to be buried.

Early Origins of the Rumbold family

The surname Rumbold was first found in Sussex at Rumbold's-Wyke (St. Rumbald), also named Rumboldswyke, a parish, in the union of West Hampnett, hundred of Box and Stockbridge, rape of Chichester. St Mary's Church, on Whyke Road, an 11th century church can still be found here and is in good repair.

Early History of the Rumbold family

One relatively recent invention that did much to standardize English spelling was the printing press. However, before its invention even the most literate people recorded their names according to sound rather than spelling. The spelling variations under which the name Rumbold has appeared include Rumbold, Rumbald, Rumble, Rumball, Rumbow and others.

Distinguished members of the family include Richard Rumbold (1622-1685), a Cromwellian soldier who took part in the Rye House Plot to assassinate King Charles II of England. In May 1685 Rumbold joined the Earl of Argyll in his expedition to Scotland. He became separated from the rest of the rebels in their disorderly marches, and was captured. As he was severely wounded, the Scottish government had him tried at once, lest he should escape his punishment by death. He was tried on 26 June, protested his innocence of any design to assassinate...
Another 90 words (6 lines of text) are included under the topic Early Rumbold Notables in all our PDF Extended History products and printed products wherever possible.

At this time, the shores of the New World beckoned many English families that felt that the social climate in England was oppressive and lacked opportunity for change. Thousands left England at great expense in ships that were overcrowded and full of disease. A great portion of these settlers never survived the journey and even a greater number arrived sick, starving, and without a penny. The survivors, however, were often greeted with greater opportunity than they could have experienced back home. These English settlers made significant contributions to those colonies that would eventually become the United States and Canada. An examination of early immigration records and passenger ship lists revealed that people bearing the name Rumbold arrived in North America very early:

Rumbold Settlers in Canada in the 18th Century

Rumbold Settlers in Australia in the 19th Century