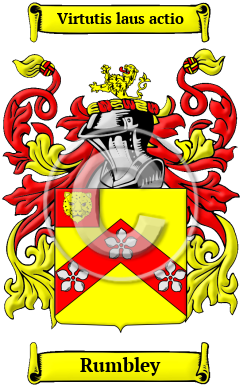 The rich and ancient history of the Rumbley family name dates back to the time of the Anglo-Saxon tribes of Britain. It comes from Rumbald, an Old German personal name. This name came to England in the wake of the Norman Conquest in 1066, as King William encouraged the immigration from continental Europe of skilled tradesmen and artisans; many of these immigrants came from Germany. Saint Rumwold (Rumbold) was a medieval infant saint in England, said to have lived for three days in 662. He is said to have been full of Christian piety despite his young age, and able to speak from the moment of his birth, requested baptism, and delivered a sermon prior to his early death. Another Saint Rumbold (Rumold, Romuold) (died 775) was an Irish or Scottish Christian missionary who was martyred near Mechelen by two men, whom he had denounced for their evil ways. St. Rumbold's Cathedral is found in Mechelen, Belgium and it is here that his remains are generally thought to be buried.

Early Origins of the Rumbley family

The surname Rumbley was first found in Sussex at Rumbold's-Wyke (St. Rumbald), also named Rumboldswyke, a parish, in the union of West Hampnett, hundred of Box and Stockbridge, rape of Chichester. St Mary's Church, on Whyke Road, an 11th century church can still be found here and is in good repair.

Early History of the Rumbley family

Spelling variations in names were a common occurrence before English spelling was standardized a few hundred years ago. In the Middle Ages, even the literate spelled their names differently as the English language incorporated elements of French, Latin, and other European languages. Many variations of the name Rumbley have been found, including Rumbold, Rumbald, Rumble, Rumball, Rumbow and others.

Distinguished members of the family include Richard Rumbold (1622-1685), a Cromwellian soldier who took part in the Rye House Plot to assassinate King Charles II of England. In May 1685 Rumbold joined the Earl of Argyll in his expedition to Scotland. He became separated from the rest of the rebels in their disorderly marches, and was captured. As he was severely wounded, the Scottish government had him tried at once, lest he should escape his punishment by death. He was tried on 26 June, protested his innocence of any design to assassinate...
Another 90 words (6 lines of text) are included under the topic Early Rumbley Notables in all our PDF Extended History products and printed products wherever possible.

Migration of the Rumbley family

Families began migrating abroad in enormous numbers because of the political and religious discontent in England. Often faced with persecution and starvation in England, the possibilities of the New World attracted many English people. Although the ocean trips took many lives, those who did get to North America were instrumental in building the necessary groundwork for what would become for new powerful nations. Among the first immigrants of the name Rumbley, or a variant listed above to cross the Atlantic and come to North America were : John Rumball who settled in Virginia in 1652; Thomas Rumball settled in Boston Massachusetts in 1635; James Rumbelow settled in Philadelphia, Pennsylvania in 1880.