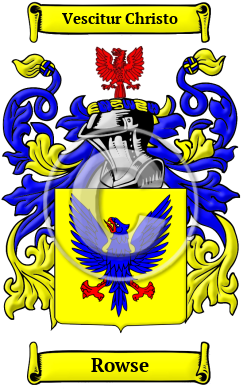 The Rowse family name dates back to 1066 when the Norman Conquest of England introduced a plethora of new names and words into Britain. It comes from an early member of the family who was a person with red hair which was in turn derived from the Old French nickname le rous, meaning redhead. Another equally valid derivation suggests that the name is a shortened form of the Norman given name Rufus. [1] [2] [3]

Early Origins of the Rowse family

The surname Rowse was first found in Devon. The first on record was Radulphus le Rufus, a knight in the train of William the Conqueror who became one of the Justices Itinerant of the counties of Wiltshire, Dorset, Somerset, Devon and Cornwall temp. Henry II. It is from this eminent person that the family of Edmerston and Halton, co. Devon descend. [4]

Early History of the Rowse family

A multitude of spelling variations characterize Norman surnames. Many variations occurred because Old and Middle English lacked any definite spelling rules. The introduction of Norman French to England also had a pronounced effect, as did the court languages of Latin and French. Therefore, one person was often referred to by several different spellings in a single lifetime. The various spellings include Rous, Rouse, Rowse and others.

Outstanding amongst the family at this time was John Rous or Ross (c. 1411-1491), the English antiquary of Warwick, born at Warwick about 1411, was son of Geoffrey Rous, a descendant of the Rowses or Rouses of Brinkelow, Warwickshire; John Russe or Rouse (1574-1652), Bodley's librarian, born in Northamptonshire, Fellow of Oriel College in 1600; Francis Rous (1579-1659), English hymnist, fourth son of Sir Anthony Rous of Halton St. Dominick, Cornwall; John Rous (c 1618-1680), an English politician, Member of...
Another 80 words (6 lines of text) are included under the topic Early Rowse Notables in all our PDF Extended History products and printed products wherever possible.

Rowse migration to the United States +

Many English families left England, to avoid the chaos of their homeland and migrated to the many British colonies abroad. Although the conditions on the ships were extremely cramped, and some travelers arrived diseased, starving, and destitute, once in the colonies, many of the families prospered and made valuable contributions to the cultures of what would become the United States and Canada. Research into the origins of individual families in North America has revealed records of the immigration of a number of people bearing the name Rowse or a variant listed above:

Rowse Settlers in United States in the 17th Century

Rowse Settlers in United States in the 19th Century

Rowse Settlers in Canada in the 18th Century

Rowse Settlers in Australia in the 19th Century

Rowse Settlers in New Zealand in the 19th Century

The British first settled the British West Indies around 1604. They made many attempts but failed in some to establish settlements on the Islands including Saint Lucia and Grenada. By 1627 they had managed to establish settlements on St. Kitts (St. Christopher) and Barbados, but by 1641 the Spanish had moved in and destroyed some of these including those at Providence Island. The British continued to expand the settlements including setting the First Federation in the British West Indies by 1674; some of the islands include Barbados, Bermuda, Cayman Island, Turks and Caicos, Jamaica and Belize then known as British Honduras. By the 1960's many of the islands became independent after the West Indies Federation which existed from 1958 to 1962 failed due to internal political conflicts. After this a number of Eastern Caribbean islands formed a free association. [18]

Rowse Settlers in West Indies in the 17th Century