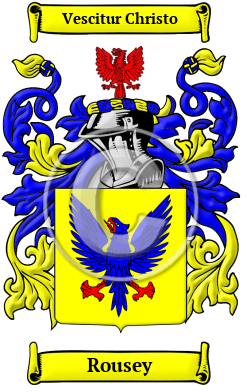 The Rousey family's name is derived from the ancient Norman culture that was established in Britain following the Norman Conquest of island in 1066. Their name originated with an early member who was a person with red hair which was in turn derived from the Old French nickname le rous, meaning redhead. Another equally valid derivation suggests that the name is a shortened form of the Norman given name Rufus. [1] [2] [3]

Early Origins of the Rousey family

The surname Rousey was first found in Devon. The first on record was Radulphus le Rufus, a knight in the train of William the Conqueror who became one of the Justices Itinerant of the counties of Wiltshire, Dorset, Somerset, Devon and Cornwall temp. Henry II. It is from this eminent person that the family of Edmerston and Halton, co. Devon descend. [4]

Early History of the Rousey family

Before English spelling was standardized a few hundred years ago, spelling variations of names were a common occurrence. Elements of Latin, Norman French and other languages became incorporated into English throughout the Middle Ages, and name spellings changed even among the literate. The variations of the surname Rousey include Rous, Rouse, Rowse and others.

Outstanding amongst the family at this time was John Rous or Ross (c. 1411-1491), the English antiquary of Warwick, born at Warwick about 1411, was son of Geoffrey Rous, a descendant of the Rowses or Rouses of Brinkelow, Warwickshire; John Russe or Rouse (1574-1652), Bodley's librarian, born in Northamptonshire, Fellow of Oriel College in 1600; Francis Rous (1579-1659), English hymnist, fourth son of Sir Anthony Rous of Halton St. Dominick, Cornwall; John Rous (c 1618-1680), an English politician, Member of...
Another 80 words (6 lines of text) are included under the topic Early Rousey Notables in all our PDF Extended History products and printed products wherever possible.

Rousey migration to the United States +

In England at this time, the uncertainty of the political and religious environment of the time caused many families to board ships for distant British colonies in the hopes of finding land and opportunity, and escaping persecution. The voyages were expensive, crowded, and difficult, though, and many arrived in North America sick, starved, and destitute. Those who did make it, however, were greeted with greater opportunities and freedoms that they could have experienced at home. Many of those families went on to make important contributions to the young nations in which they settled. Early immigration records have shown some of the first Rouseys to arrive on North American shores:

Rousey Settlers in United States in the 17th Century