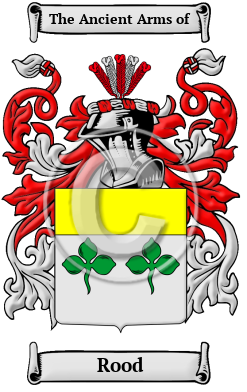 Early Origins of the Rood family

The surname Rood was first found in Devon where the Hundredorum Rolls of 1273 listed Nicholas de la Rodde as holding lands there at that time. Over one hundred years later, the Yorkshire Poll Tax Rolls of 1379 listed Johannes Rodde. [3]

Moving to the extreme south and west of England, we found an early listing of the family in the parish of Northill, Cornwall. "The manor of Treveniel was the property of Sir George Carew, prior to the sixteenth century, of whom it was then purchased by the Spoures; and being included in the bequest of Mrs. Grylls to Francis Rodd, Esq. it has descended with her other property, to Francis Hearle Rodd, Esq. its present possessor. By a custom which had prevailed from time immemorial, the lord of this manor claimed of the mayor of Launceston the humiliating service of holding his stirrup, whenever he mounted his horse on the occasion of the duke of Cornwall's coming into the town. Another manor called Tolcarne, or Talkarne, was also included in the bequest of Mrs. Grylls to Mr. Rodd. This has likewise descended with the other estates, and is the property of F. H. Rodd, Esq. " [4]

Early History of the Rood family

Spelling variations of this family name include: Rodd, Rod, Rode, Rodde, Rodda and others.

Distinguished members of the family include Theoderic (Theodoric or Theodericus) Rood ( fl. 1481), a printer of incunabula at Oxford, England. Francis Rodes (c. 1530-1588), was an English judge and son of John Rodes of Staveley Woodthorpe, Derbyshire. "The family traced its descent from Gerard de Rodes, a prominent Baron in the reign of Henry II. Rodes was succeeded in the Barlborough estates by his eldest son by his first wife, Sir John Rodes (1562-1639), whose son Francis (d. 1645) was created a Baronet on 14 Aug...
Another 85 words (6 lines of text) are included under the topic Early Rood Notables in all our PDF Extended History products and printed products wherever possible.

Migration of the Rood family to Ireland

Some of the Rood family moved to Ireland, but this topic is not covered in this excerpt.
Another 50 words (4 lines of text) about their life in Ireland is included in all our PDF Extended History products and printed products wherever possible.

Rood migration to the United States +

Rood Settlers in United States in the 17th Century

Rood Settlers in United States in the 18th Century

Rood Settlers in United States in the 19th Century

Rood Settlers in Canada in the 18th Century

Historic Events for the Rood family +