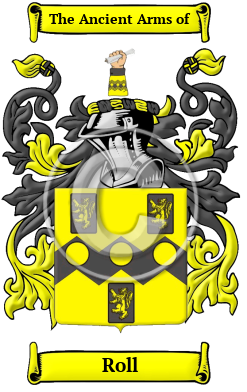 The Norman Conquest of England in 1066 brought much change to the island nation, including many immigrants with new names. Among these immigrants were the ancestors of the Roll family, who lived in Yorkshire. Their name, however, is a reference to Roullours, in Calvados, in the arrondissement of Dieppe, Normandy, the family's place of residence prior to the Norman Conquest of England in 1066. [1]

Early Origins of the Roll family

The surname Roll was first found in Yorkshire where they were undertenants in the honor of Richmond being descended from the distinguished Norman family of Rollos of Roullours in Calvados, arrondisement of Dieppe, in Normandy. A century later it appears that William de Rollos, Lord of Bourne in the county of Lincoln to the south, was also a branch of this distinguished family.

Richard Rolle (1290-1349) was an English religious writer, Bible translator, and hermit. He is also known as Richard Rolle of Hampole or de Hampole. He studied at Oxford.

Farther to the south in the parish of Whitstone, Cornwall, "The manor of Nethercot, which has its site in this parish, though it extends into that of Week St. Mary, belonged to the Rolles of Heanton." [2]

Early History of the Roll family

Before the last few hundred years the English language had no fixed system of spelling rules. For that reason, spelling variations occurred commonly in Anglo Norman surnames. Over the years, many variations of the name Roll were recorded, including Rolls, Rowles, Rolston, Rolleston, Rollesby, Rolles, Rholes and many more.

Outstanding amongst the family at this time was Robert Rolle (d. 1633) of Heanton Satchville, Devon; and his son, Henry Rolle (1589-1656), an English judge and Chief Justice of the King’s Bench; Sir Samuel Rolle (d. 1647); and his son, Dennis Rolle (d. 1671) of Great Torrington, a lawyer of the Inner Temple; and his son, Samuel Rolle (1669-1735) of Hudscott Manor...
Another 62 words (4 lines of text) are included under the topic Early Roll Notables in all our PDF Extended History products and printed products wherever possible.

In the United States, the name Roll is the 6,019th most popular surname with an estimated 4,974 people with that name. [3]

Roll migration to the United States +

The unstable environment in England at this time caused numerous families to board ships and leave in search of opportunity and freedom from persecution abroad in places like Ireland, Australia, and particularly the New World. The voyage was extremely difficult, however, and only taken at great expense. The cramped conditions and unsanitary nature of the vessels caused many to arrive diseased and starving, not to mention destitute from the enormous cost. Still opportunity in the emerging nations of Canada and the United States was far greater than at home and many went on to make important contributions to the cultures of their adopted countries. An examination of many early immigration records reveals that people bearing the name Roll arrived in North America very early:

Roll Settlers in United States in the 18th Century

Roll Settlers in United States in the 19th Century