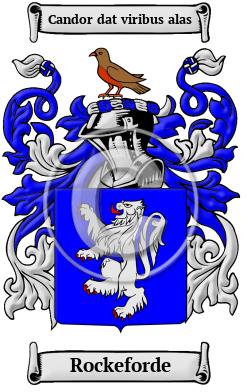 The Anglo-Norman Conquest of Ireland lead by Strongbow introduced the first non-Gaelic elements into Irish nomenclature. These Anglo-Normans brought some traditions to Ireland that were not readily found within Gaelic system of hereditary surnames. One of the best examples of this is the local surname. Local surnames, such as Rockeforde, were taken from the name of a place or a geographical feature where the person lived, held land, or was born. These surnames were very common in England, but were almost non-existent within Ireland previous to the Conquest. The earliest surnames of this type came from Normandy, but as the Normans moved, they often created names in reference to where they actually resided. Therefore, some settlers eventually took names from Irish places. Originally, these place names were prefixed by de, which means from in French. This type of prefix was eventually either made a part of the surname, if the place name began with a vowel, or was eliminated entirely. The Rockeforde family originally lived in either of the settlements called Rochford in the English counties of Essex and Worcestershire. In fact, the family gave its name to Stoke Rochford in Lincolnshire and held other lands in Warwickshire, Hertfordshire and Yorkshire. [1]

Early Origins of the Rockeforde family

The surname Rockeforde was first found in counties Meath and Kilkenny (Irish: Cill Chainnigh), the former Kingdom of Osraige (Ossory), located in Southeastern Ireland in the province of Leinster, where they had been granted lands by Strongbow, Earl of Pembroke, during the Anglo-Norman invasion of Ireland in 1172. [2]

Early History of the Rockeforde family

This web page shows only a small excerpt of our Rockeforde research. Another 95 words (7 lines of text) covering the years 1224, 1194, 1652, 1727, 1690 and 1652 are included under the topic Early Rockeforde History in all our PDF Extended History products and printed products wherever possible.

During an investigation of the origin of each name, it was found that church officials and medieval scribes spelled many surnames as they sounded. Therefore, during the lifetime of a single person, a name could be spelt numerous ways. Some of the spelling variations for the name Rockeforde include Rockford, Rockfort, Rochfort, Rochefort, Roakfort, Roakford, Rochford, Rocheford, Roachford, Roachfort, Rockfurd, Rockfurt, Ruckford, Ruckfort, Rucford and many more.

Notable amongst the family up to this time was Simon Rochfort (died 1224), English bishop of Meath, appointed by Pope Innocent III. He was the first Englishman who held that see, to which he was consecrated in 1194. He was one of the judges appointed by Innocent III in the famous suit for possession of the body of Hugh de Lacy...
Another 61 words (4 lines of text) are included under the topic Early Rockeforde Notables in all our PDF Extended History products and printed products wherever possible.

Migration of the Rockeforde family

A great number of Irish families left their homeland in the late 18th century and throughout the 19th century, migrating to such far away lands as Australia and North America. The early settlers left after much planning and deliberation. They were generally well off but they desired a tract of land that they could farm solely for themselves. The great mass of immigrants to arrive on North American shores in the 1840s differed greatly from their predecessors because many of them were utterly destitute, selling all they had to gain a passage on a ship or having their way paid by a philanthropic society. These Irish people were trying to escape the aftermath of the Great Potato Famine: poverty, starvation, disease, and, for many, ultimately death. Those that arrived on North American shores were not warmly welcomed by the established population, but they were vital to the rapid development of the industry, agriculture, and infrastructure of the infant nations of the United States and what would become Canada. Early passenger and immigration lists reveal many Irish settlers bearing the name Rockeforde: Denis Rochford, his wife Mary and two children, who settled in Pennsylvania in 1682; and Peter Rockford, who settled in Philadelphia in 1875.