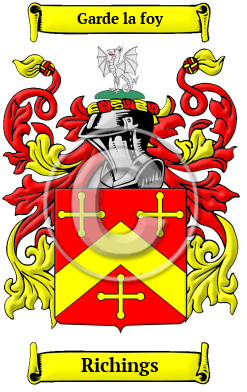 The name Richings came to England with the ancestors of the Richings family in the Norman Conquest of 1066. The Richings family lived in Hampshire. Their name, however, is a reference to Riche, in Lorraine, France, the family's place of residence prior to the Norman Conquest of England in 1066. Another equally valid derivation of the name suggests that it is patronymic, which means it was adapted from the first name of the original bearer's father. According to this version it comes from the Norman personal name Richard. Richings is a classic example of an English polygenetic surname, which is a surname that was developed in a number of different locations and adopted by various families independently.

Early Origins of the Richings family

The surname Richings was first found in Hampshire where the first on record include Edmund Rich, Saint Edmund (1175-1240) English churchman, who became Archbishop of Canterbury. He was born at Abingdon and his father's name was Edward or Reinald Rich. His father withdrew to the monastery of Evesham, or more probably to Ensham, near Oxford. [5]

Early History of the Richings family

Multitudes of spelling variations are a hallmark of Anglo Norman names. Most of these names evolved in the 11th and 12th century, in the time after the Normans introduced their own Norman French language into a country where Old and Middle English had no spelling rules and the languages of the court were French and Latin. To make matters worse, medieval scribes spelled words according to sound, so names frequently appeared differently in the various documents in which they were recorded. The name was spelled Rich, Riche, Richin, Riching, Richins, Richings and others.

Outstanding amongst the family at this time was Richard Rich (c. 1496-1567), 1st Baron Rich, Lord Chancellor of England during the reign of King Edward VI; Barnabe Rich (1540-1620), English author and soldier; Sir Edwin Rich (c. 1594-1675), an English lawyer and politician who sat in the House of Commons in 1640; Robert Rich (1587-1658) 2nd Earl of Warwick, an English colonial administrator, admiral, and puritan; Robert Rich, 3rd Earl of Warwick (1611-1659); Jeremiah Rich (died c. 1660), an English stenographer who published...
Another 82 words (6 lines of text) are included under the topic Early Richings Notables in all our PDF Extended History products and printed products wherever possible.

Migration of the Richings family to Ireland

Some of the Richings family moved to Ireland, but this topic is not covered in this excerpt. More information about their life in Ireland is included in all our PDF Extended History products and printed products wherever possible.

Richings migration to the United States +

Because of this political and religious unrest within English society, many people decided to immigrate to the colonies. Families left for Ireland, North America, and Australia in enormous numbers, traveling at high cost in extremely inhospitable conditions. The New World in particular was a desirable destination, but the long voyage caused many to arrive sick and starving. Those who made it, though, were welcomed by opportunities far greater than they had known at home in England. Many of these families went on to make important contributions to the emerging nations of Canada and the United States. Analysis of immigration records indicates that some of the first North American immigrants bore the name Richings or a variant listed above:

Richings Settlers in United States in the 17th Century

Richings Settlers in Australia in the 19th Century