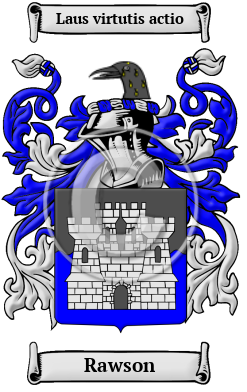 The name Rawson was carried to England in the enormous movement of people that followed the Norman Conquest of 1066. It comes from the Norman given name Ralph. This name, which also occurs as Ralf, Rolf, and Raoul, is adapted from the Old French given name Raol. [1] [2]

Early Origins of the Rawson family

The surname Rawson was first found in Yorkshire where "Rawson has been a familiar Yorkshire surname for the last five hundred years." [3]

Further north in Scotland, the first record of the name was William Rauessone of Berwickshire who rendered homage to King Edward I of England in 1296. Later, Andrew Rawsoun was messenger of arms in Banff in 1569 and James Rawson was reidare at Raffort, 1574. [4]

Early History of the Rawson family

Anglo-Norman names are characterized by a multitude of spelling variations. When the Normans became the ruling people of England in the 11th century, they introduced a new language into a society where the main languages of Old and later Middle English had no definite spelling rules. These languages were more often spoken than written, so they blended freely with one another. Contributing to this mixing of tongues was the fact that medieval scribes spelled words according to sound, ensuring that a person's name would appear differently in nearly every document in which it was recorded. The name has been spelled Rawson, Rawsone and others.

Outstanding amongst the family at this time was John Rawson, Viscount Clontarff (c. 1470-1547.) He was descended from an ancient family seated at Water Fryston in Yorkshire; his father, Richard Rawson, was from 1478 to 1483, senior warden of the Mercers' Company, and in 1476 served as alderman in London, subsequently becoming sheriff. In 1517 Rawson was made Treasurer of Ireland. A brother Richard (died 1543) was chaplain to Henry VIII and archdeacon of Essex. [5] Edward Rawson (1615-1693), was an English settler to America from Dorset...
Another 85 words (6 lines of text) are included under the topic Early Rawson Notables in all our PDF Extended History products and printed products wherever possible.

In the United States, the name Rawson is the 5,329th most popular surname with an estimated 4,974 people with that name. [6]

Migration of the Rawson family to Ireland

Some of the Rawson family moved to Ireland, but this topic is not covered in this excerpt. More information about their life in Ireland is included in all our PDF Extended History products and printed products wherever possible.

Rawson migration to the United States +

For many English families, the political and religious disarray that plagued their homeland made the frontiers of the New World an attractive prospect. Thousands migrated, aboard cramped disease-ridden ships. They arrived sick, poor, and hungry, but were welcomed in many cases with far greater opportunity than at home in England. Many of these hardy settlers went on to make important contributions to the emerging nations in which they landed. Among early immigrants bearing the name Rawson or a variant listed above were:

Rawson Settlers in United States in the 17th Century

Rawson Settlers in United States in the 18th Century

Rawson Settlers in United States in the 19th Century

Rawson Settlers in Canada in the 18th Century

Rawson Settlers in Australia in the 19th Century

Rawson Settlers in New Zealand in the 19th Century

Historic Events for the Rawson family +