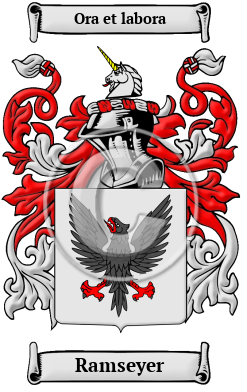 The surname Ramseyer comes from the place-name Ramsey, which is derived from the Old English words "hramsa" and "eg," which mean "wild garlic" and "island." Thus, the original bearers of the surname came from an island where wild garlic was grown.

Early Origins of the Ramseyer family

The surname Ramseyer was first found in Huntingdonshire, where the first record of the name was Simund de Ramesie who witnessed the charter by Turstan filius Leuingus of the church of Livingston to the Abbey of Holyrod (c. 1153-1156.) [1]

In 1196, Simon's son (or grandson) witnessed a charter to the Church of Coldingham and in the following century many branches of the Clan began to emerge. About 1216, Sir Nessus Ramsay was noted for settling local disputes, and he put his seal on a Charter of King Alexander II of Scotland. William Ramsay was one of the signatories of the Ragman Rolls, when two thousand Earls and Barons were forced to swear fealty to Edward I of England, during the latter's brief conquest of Scotland.

But later, in 1320 William Ramsay swore allegiance to King Robert the Bruce of Scotland when he, a Campbell, a Cameron, a MacDuff, a Fergusan and a Murray signed the 'Declaration of Independence' in Arbroath, asserting to the Pope that Scotland would never again be subject to English rule.

Sir Alexander Ramsay (died 1342), of Dalhousie, Scottish patriot, was descended from the main line of the Scottish Ramsays, the earliest of whom was Simundus de Ramsay, a native of Huntingdon in England, who received from David I of Scotland a grant of lands in Midlothian. "Sir Alexander is supposed to have been the son of Sir William de Ramsay, who, for his lands of Dalwolsie or Dalhousie, Midlothian, and of Foulden, Berwickshire, swore fealty to Edward I in 1296." [2]

Early History of the Ramseyer family

Spelling variations of this family name include: Ramsay, Ramsey and others.

Notable among the family at this time was Andrew Ramsay (1574-1695), Scottish divine and Latin poet, son of David Ramsay of Balmain, Kincardineshire; Sir Andrew Ramsay (c. 1620-1688) Scottish Baronet and Lord Provost of Edinburgh, of Abbotshall and Waughton, was eldest son of Andrew Ramsay; William Ramsay, 1st Earl of Dalhousie (d. 1672); George Ramsay, 2nd Earl of Dalhousie (d...
Another 60 words (4 lines of text) are included under the topic Early Ramseyer Notables in all our PDF Extended History products and printed products wherever possible.

Migration of the Ramseyer family to Ireland

Some of the Ramseyer family moved to Ireland, but this topic is not covered in this excerpt.
Another 90 words (6 lines of text) about their life in Ireland is included in all our PDF Extended History products and printed products wherever possible.

Migration of the Ramseyer family