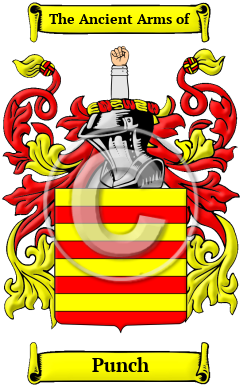 The name Punch came to England with the ancestors of the Punch family in the Norman Conquest of 1066. It comes from the Latin-Norman personal name Pontius, "hence, doubtless, as a diminutive the name Puncheon, variant of Punshon." [1]

Two other sources claim the name was Norman in origin: having derived from the Old Norman French name Ponche or the Old French name Ponce; [2] and/or from the Norman name Poyntz or Ponz, a branch of the Fitz-Ponce family. [3]

However, two other very reputable sources are at a loss to the name's origin. "This surname is derived from a nickname. I cannot explain this name." [4] "Its etymology has not occurred to me." [5]

Early Origins of the Punch family

The surname Punch was first found in various counties throughout Britain. The first record of the family was found in the Pipe Rolls of 1181 where Godfrey, Phillip Punch(e) was listed. Seman Ponche was listed in the Subsidy Rolls of Suffolk in 1327. [2] The Hundredorum Rolls of 1273 list: Robert Punche in Oxfordshire; and Philip Punche in Suffolk. Later the Rolls of Parliament listed John Punche, yeoman of the crown (no date given.) [4]

"The manor [of Linch in Sussex] is described in the Domesday Survey under the name of Lince, and at the time when that record was compiled, there were two ministers here, with a church. In the 16th century, the place was parcel of the estates of the dukes of Norfolk; it afterwards became the property of Viscount Montague, and eventually of the family of Poyntz." [6]

In Somerset, "Leighland, in the parish of Old Cleeve, was the property of the Poyntz family. From them it descended to the Rowes, in the reign of William III." [7]

Early History of the Punch family

Anglo-Norman names tend to be marked by an enormous number of spelling variations. This is largely due to the fact that Old and Middle English lacked any spelling rules when Norman French was introduced in the 11th century. The languages of the English courts at that time were French and Latin. These various languages mixed quite freely in the evolving social milieu. The final element of this mix is that medieval scribes spelled words according to their sounds rather than any definite rules, so a name was often spelled in as many different ways as the number of documents it appeared in. The name was spelled Punch, Poyntz, Pons and others.

Outstanding amongst the family at this time was Sir Francis Poyntz (died 1528), English diplomatist, third son of Sir Robert Poyntz (d. 1521) of Iron Acton, Gloucestershire; and his son, Sir Anthony Poyntz (c.1480-1533), an English diplomat and naval commander, High Sheriff of Gloucestershire in 1507, 1522 and 1527; and his son, Sir Nicholas Poyntz (1510-c.1556), a prominent English courtier during the latter part of Henry VIII's reign; and...
Another 69 words (5 lines of text) are included under the topic Early Punch Notables in all our PDF Extended History products and printed products wherever possible.

In the United States, the name Punch is the 14,788th most popular surname with an estimated 2,487 people with that name. [8]

Punch migration to the United States +

Because of the political and religious discontent in England, families began to migrate abroad in enormous numbers. Faced with persecution and starvation at home, the open frontiers and generally less oppressive social environment of the New World seemed tantalizing indeed to many English people. The trip was difficult, and not all made it unscathed, but many of those who did get to Canada and the United States made important contributions to the young nations in which they settled. Some of the first North American settlers with Punch name or one of its variants:

Punch Settlers in United States in the 18th Century

Punch Settlers in United States in the 19th Century

Punch Settlers in Canada in the 19th Century

Punch Settlers in Australia in the 19th Century

Punch Settlers in New Zealand in the 19th Century

Punch Settlers in West Indies in the 17th Century