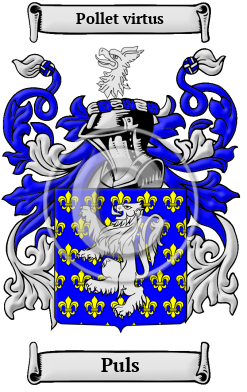 The Puls name has descended through the generations from the ancient Anglo-Saxon culture. Their name comes from having lived near a pool of water. [1] The surname Puls belongs to the class of topographic surnames, which were given to people who resided near physical features such as hills, streams, churches, or types of trees.

Early Origins of the Puls family

The surname Puls was first found in Dorset at Poole, now a large coastal town and seaport. While today Poole is a large tourist resort, looking back to as early as the Iron Age, this costal town was a major fishing port. The Romans landed at Poole during their conquest of Britain in the 1st century.

Years later, the Vikings in 876 landed; Guthrum sailed his fleet through the harbour to attack Wareham, and in later 1015, Canute began his conquest of England here using it as a base to raid and pillage Wessex. Centuries later in the 16th century, Poole would become a major commercial center for the North American colonies, including the vast fisheries of Newfoundland. Accordingly, many Newfoundlanders trace their lineage through Poole or nearby communities. Another branch was found at Ewelme in Oxfordshire at ancient times.

Another source notes: "the oldest family of this name, Poole of Poole, co. Chester, were lords of that estate from an early period. The name was variously written, in the XIV. century, Pull, Poole, and De la Poole." [2]

"William de la Pole, Duke of Suffolk, who obtained the manor by marriage with Alice, daughter and heiress of Thomas Chaucer, son of Geoffrey Chaucer, the poet, in whose family it had been for many years, erected the present church and a noble mansion, of which latter only some of the outoffices now remain. There are some handsome monuments, one of which, to the memory of the Duchess of Suffolk, who died in 1475, is elaborately embellished; the Chaucer monument, an altar-tomb, is ornamented with numerous shields of armorial bearings, and inlaid with brasses on which are the effigies of a knight and his lady, in the costume of the fifteenth century." [3]

"William de la Pole, Earl and Duke of Suffolk, the redoubted warrior of the martial times of Henry V. and Henry VI., was derived from the Norman De la Pole. From the same origin also sprang the De la Poles of Staffordshire, the parent stock of the Poles of Radborne, co. Derby, and the Poles, Barons Montagu, illustrious for having given birth to Cardinal Pole, Archbishop of Canterbury, the most eminent prelate of his age, one of the three presidents of the Council of Trent." [4]

Again in Radbourn (Radborne) in Derbyshire: "On the death of Sir John Chandos, the celebrated warrior, in 1370, the estate passed to his representatives in the female line, and eventually to Sir Peter de la Pole, from whom the manor has descended to its present owner, Edward Sacheverel Chandos Pole, Esq. Radbourn Hall, a large brick mansion of modern date, the seat of the Pole family, stands on an eminence in a well-wooded park, commanding extensive views in all directions." [3]

Somerset was an early point of importance to the family for it is there that we find: Boniface atte Poule; Stephen atte Poule; and Philip atte Poule all recorded 1 Edward III (in the first year of King Edward III's reign.) [5]

The Hundredorum Rolls of 1273 had only one early entry, that of Walter de la Pulle, Oxfordshire and the Yorkshire Poll Tax Rolls of 1379 similarly had only one: Johanna de Pulle. [6]

In Scotland, the name is "perhaps local, from residence by a pool. William del Pol of Donde granted a charter, 1321. William, Adam, and Mathew Pule appear in 1624, and John Puill was merchant burgess of Dumfries, 1638." [7]

Early History of the Puls family

Notables of the family at this time include Michael de la Pole, Earl of Suffolk (1330?-1389), Lord Chancellor, son of Sir William de la Pole (d. 1366); and his son, Michael de la Pole, 2nd Earl of Suffolk (1361-1415), eldest son of Michael de la Pole, Earl of Suffolk; Margaret Pole the Blessed, Countess of Salisbury (1473-1541), an English peeress - she was executed in 1541 at the command of King Henry VIII; Sir Richard Pole, KG (1462-1505), created Knight of the Garter and married to Margaret Pole, 8th Countess of Salisbury, a member of the Plantagenet dynasty, to reinforce the...
Another 201 words (14 lines of text) are included under the topic Early Puls Notables in all our PDF Extended History products and printed products wherever possible.

Migration of the Puls family to Ireland

Some of the Puls family moved to Ireland, but this topic is not covered in this excerpt.
Another 34 words (2 lines of text) about their life in Ireland is included in all our PDF Extended History products and printed products wherever possible.

Puls migration to the United States +

To escape the unstable social climate in England of this time, many families boarded ships for the New World with the hope of finding land, opportunity, and greater religious and political freedom. Although the voyages were expensive, crowded, and difficult, those families that arrived often found greater opportunities and freedoms than they could have experienced at home. Many of those families went on to make significant contributions to the rapidly developing colonies in which they settled. Early North American records indicate many people bearing the name Puls were among those contributors:

Puls Settlers in United States in the 19th Century