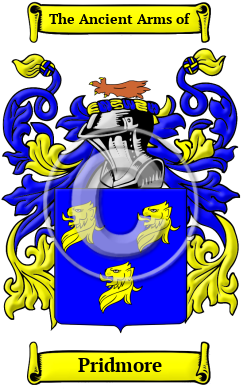 The Pridmore surname in England is of Norman origins, thought to have originally been a nickname from the Old French "prud’homme" meaning "wise man."

Early Origins of the Pridmore family

The surname Pridmore was first found in Wiltshire, and Surrey. where Gilbert Prodhome or Prudume was on record in the Pipe Rolls in the 12th century. The name Roger Prodomme or Prodhomme was recorded in the Feet of Fines of Essex in 1284, and in 1326. The place named Pridhamsleigh, in Devon is named for John Prodhomme, who lived there in 1281. Like many Norman names, Pridmore made its way to Scotland, where the first record of the name was of Willelmus Prodomme of Scotia, a mercator who had safe conduct to England in 1373.

Early History of the Pridmore family

More information is included under the topic Early Pridmore Notables in all our PDF Extended History products and printed products wherever possible.

In the United States, the name Pridmore is the 14,791st most popular surname with an estimated 2,487 people with that name. [1]

Migration of the Pridmore family to Ireland

Some of the Pridmore family moved to Ireland, but this topic is not covered in this excerpt.
Another 105 words (8 lines of text) about their life in Ireland is included in all our PDF Extended History products and printed products wherever possible.

Pridmore migration to the United States +

Pridmore Settlers in United States in the 19th Century

Pridmore Settlers in Australia in the 19th Century

Historic Events for the Pridmore family +